I CAN’T BELIEVE THAT SOMEONE so talented, so good can be unsigned! Andrew Solomon is the complete artist; a very talented singer/songwriter who makes really good music. 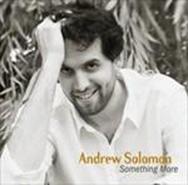 Andrew has released three albums and his latest album Something More is available to buy on iTunes (even here in Australia). He even has had some of his songs played on American TV shows.

On Andrew’s Myspace page www.myspace.com/andrewsolomon he has posted six tracks which range from adult contemporary to pop. He is a cross between Rob Thomas, John Mayer and Peter Gabriel, but Andrew has a real uniqueness to him and his music. It’s hard to believe that he works in the finance industry as his everyday job!

The first track that begins playing on Andrew’s Myspace page is the very catchy The Hurting Distance. He uses the piano to build the song up then there’s a rocky chorus with guitar and his strong husky vocals. If you scroll down the page you will be able to watch an acoustic version of The Hurting Distance too.

Leap Of Faith is a feel-good funky track that you won’t be able to stop tapping your toes to. Too Much For You has a soulful feel to it. Lay Me Down sounds familiar to me for some strange reason. It’s a great dark track and is different, something that you’d expect from Peter Gabriel. The ending is quite clever.

The last two tracks Trying Not To Know and I Will are two beautiful songs that highlight Andrew’s strengths as a singer and songwriter.

On Andrew’s Myspace you can also watch an interview with him. Here you’ll see how nice he is.

He told Gigs ‘n Interviews, “I would certainly welcome a deal if it made sense. But I also think the proliferation of social networking tools really allows artists to directly reach [their] fans and build a following. I’ve been spending time writing for other artists and also written for film and TV, so I’d probably be more inclined to sign the right publishing deal if it came along.”