THE RED PAINTINGS AREN’T your usual rock band. In fact I’m sure you wouldn’t have heard the concept that The Red Paintings use at their gigs. Each gig sees a different artist painting on a human canvas onstage. Often songs are created from the paintings the artists paint on human canvases that are done onstage each night. 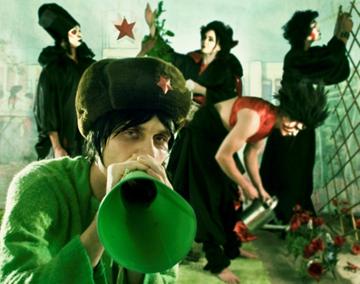 Outstandingly their latest album The Revolution Is Never Coming took a massive five years to make as it included a twenty piece choir and a forty-five piece orchestra as well as sounds from a theremin (an early electric instrument.

Singer/songwriter and proud creator Trash McSweeney is excited to be touring Australia in January after putting it out on Facebook if 1,000 people “like” them. So in January The Red Paintings are keeping their word and touring downunder.

Trash (what a cool rockstar name) kindly agreed to do an interview with me in preparation for The Red Paintings tour.

Your music is a mixture of heavy rock and orchestra. Can you explain how you got the idea for it?

I was obsessed with orchestral music from a young age and studied many orchestral pieces and used the different structures or compositions to create guidelines in my own songs or at least experiment with them. I’ve never really wanted to sound like everyone else around me, always been trying to think and create sound outside what was happening around me. I’ve also always found orchestral music to be so colourful and full of life, endless possibilities you might say. I grew up in the 90’s so of course a big sound like The Smashing Pumpkins was in my blood. Oh and I should mention my other loves like Atari Teenage Riot, The Posies, Mogwai and The Dirty Three, passionate bands like these added to a pretty colourful spectrum of sound to work with in my opinion but also painters or artists like Mark Ryden, Brett Whitley have been huge influences on my compositions. I’ve never really been fond of a typical three piece rock band with five minutes solos, I would much rather break out a solo on a violin or cello, it sounds so much more emotional and raw to my ears.

As classed as “a progressive rock / theatrical performance group”. How do you describe yourself as a band?

Many people have said from day one we are a mixture of sounds and ideas labelled ”Orchestral Art Rock”. Certainly was what I was trying to achieve. A sound and an experience that combines so much from Opera singers to glockenspiels to stage painters to body art. The ideas are endless and forever changing.

Last month on your Facebook page, you posted if 1000 people “like” the one post, you’d return to Australia for the first headline tour in three years. You received a thousand “likes” and so during the summer you’re touring the capital cities. You must be so chuffed to get such a response?

Yes it was a nice surprise. Yeah we had not headlined toured Australia in three years and I’ve spent pretty much all that time in the USA touring the act and making the record so it was really about testing the waters, seeing what love was still floating around and I guess pushing ourselves if it happened to take the plane back to OZ and once again bring Australia another fresh stage show and sound to fall into and it worked. Not an easy talk touring Australia but we are locked in now, no turning back.

Your live shows must be a spectacle. Do you want to reveal any surprises about your upcoming gigs to your fans?

There are so many surprises on this black paintings tour even I can’t keep up with what is happening next. Let’s just say it will be close to the feeling of being sucked into a black hole and a set up like we have never toured before. {It’s will be a} very exciting for all of us in TRP camp.

Where do you get inspiration to make such beautiful music like We Belong in the Sea and Portrait of a Dead Soul?

Well, there kinda oxymorons cause they are dark as hell but yet so soft and gentle. We belong in the sea is a good example of how I can only write a fair song when I’m at my worst. Three weeks before I wrote it I had a seizure on tour in an airport, breaking my jaw in two bits. I was out for three months and was at the lowest point in my life but it lead my hands to a grand piano and some realisations I was having at the time channelled through me to say such words from feelings. You could say my songs are created from epiphanies.

Your debut album The Revolution Is Never Coming took five years to produce. Is the title a bit of tongue-in-cheek?

A contradiction you mean? Yeah I guess it is.  I’m not one to go into it as I believe the album and itsthirteen songs speak for the title and all it means to me but I will say this bloody album title feels like it has jinxed me somewhat. I don’t think I will ever create an album this grand again in my lifetime. It’s my entire life thoughts and feelings in one whole album. Just like Rome it couldn’t be created in one year.

Besides touring, what are you looking forward to while you’re travelling around?

Well for me the most exciting part for TRP is the actual stage painters we work with each night. I just never know how a show is going to be perceived not only by the audience but the artist or human canvases also. To be singing and playing on stage and watching these people at work in real time, inside my songs and to see the finish product is just so inspiring for me. I’ve created many songs just by looking at our artists’ paintings and finding the right musical notes.

These are the tour dates for The Red Paintings: