IF YOU’RE A FAN OF ROCK pushing the boundaries, you should check out The Moniters. 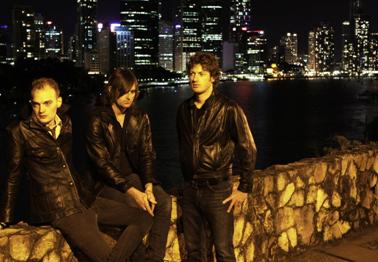 The band of Brissy guys have invented a sound of their own which is very rare these days. Last month they celebrated the release of their Sex City Lovers which consists of songs that are totally different to each other.

The first track Exit The System is a mixture of dark rock pop that you could either mosh, dance or brood to. The Filth Beneath Her Fingernails is pure genius! It’s electronica but with a really rock flavour and if a radio station doesn’t pick this track up, they’re even more stupid than I thought.

Matt Schrader, The Moniters’ drummer kindly did the following interview with me last week so here it is folks:

How did you come up with your name?

Moniters came about pretty much how society is at the moment, with the whole big brother monitoring thing, and everybody knows everybody’s daily activities via Facebook etc… Also our drummer got sick of having to carry his foldback speaker (monitor) around to gigs because we weren’t supplied one, so he said we should name the band Moniters!

Your EP Sex City Lovers is a collective mix of genres! The track The Lights Go Down could be easily played in a nightclub as well as being a bit dark. Was this intentional?

Well, all three of us have loads of different influences that we bring to the band, which is how we get our sound I guess. We didn’t set out to write a genre hopping EP, but I guess it kind of ended up that way.


The Filth Beneath Her Fingernails is a great electric rock track! You’ve said, “All the tracks were casually demoed in my lounge room over a few drinks. After a bit of experimentation with electronic sampling and drum patterns, we found ourselves naturally drifting towards a dark, angsty sound strewn with electronic and live drums, dissident guitar and bass lines, with deep baritone vocals. While this is the main vibe of the record, it does have quite upbeat moments and is definitely a record to party to.” I think you’re a bunch of geniuses to be able to just come up with a unique sound!

Cheers! Filth was actually written last minute in the studio, and it surprised all of us how it turned out. The other 5 songs on the EP we based the samples around the rock core of the song, but with filth it kind of worked the other way, where Jimi had these great ideas electronically, which we then morphed into a rock song. I guess our sound really represents us as people. We can be a bit dark and angsty, but we also love to laugh and have a good time!

Why did it take you over a year to record Sex City Lovers? Are you perfectionists?

{laughs} Maybe we are! I think the main reason was that we wanted to be 100% happy with the whole concept of the EP, and being an independent band, that all takes time. Also we needed to raise the funds to give it a proper release.

Where did you record the EP?

We recorded down at Sing Sing studios in Melbourne with Forrester Savell. It was great to get away from home and hole up in a studio for two straight weeks, and Forrester was great to work with.

You’re currently touring the Aussie East Coast hitting bars and clubs. Are you enjoying that?

Mate, we love touring. Just the three of us in a van with all our gear tripping around the place. And to pull up in a town for the first time and play our music there is a great buzz, and meeting new people, having a beer and a joke….we could do it forever, and hopefully we will!!!

Have you tried approaching radio stations to play your stuff?

We are getting a lot of airplay on regional stations, and we have just approached the J’s last week, so fingers crossed!

Are you planning to record an album after the tour?

Yeah, that is definitely on the cards in the future. We will probably tour again later on this year, and then start to plan to record again after that. We already have a few new songs we are playing on this tour, so writing is already underway!!!

Go to Myspace to have a listen to their tracks and here are their remaining tour dates:

Many thanks to Matt again! All the best for The Moniters’ future!

Also, as always, a big thankyou to Will from www.heapsaflash.com.au.