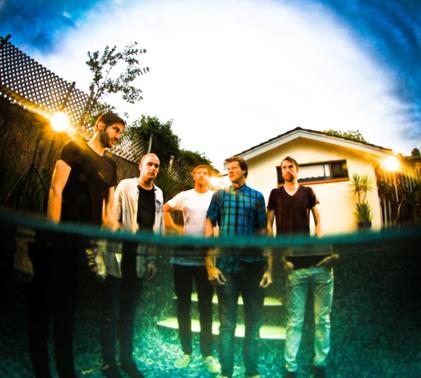 ORIGINALLY FROM ADELAIDE and originally called The Touch,  Messrs are about to release their debut single Everyone Knows on October 7th. In the meantime you can download it for free at http://messrs.bandcamp.com/.

In May this year the guys toured the UK, sleeping in a caravan and bathing in “invigorating” Ireland’s seas! Craig Lock admits the fact they found themselves playing in front of “pretty big crowds” was unexpected, but the bands are looking forward to performing at home in November.

Craig Lock from Messrs kindly and very efficiency answered questions for me so thanks Mark. Thanks Danae from Remedy Music for suggesting this interview.

Why did you decide to change your name from The Touch to Messrs?

Well, there was a legal aspect in that a few bands overseas are using the name The Touch already. One recently signed to French label Kitsune and that was kind of a tipping point where we can no longer viably use the name. The other side of the name change is changing our sound quite dramatically over the last few years to the point where it’s pretty unrecognisable as The
Touch. We wanted to have a fresh start and erase any preconceptions that people might already have about The Touch. Messrs gives us that start.

Wow.. It’s very impressive to read that your new single Everyone
Knows was written in under thirty minutes. Can you describe how it came about?

{laughs…} Well it was one of those strange songs that just kind of fell out all at once. Chad, our drummer started playing the beat and then almost instantly everyone played the rest of the song. Even the words and melody just happened instantly. Sometimes songs happen like that but mostly we have to work on them for weeks until we are happy with them. Even though the song was written very quickly we still spent months on the recording and production side of it!

Everyone Knows is following Cut Copy’s fusion of electronica and rock. This is seems to be popular with artists/bands experimenting with technology but still want to have an organic sound. Do you think this kind of music could be an alternative in clubs?

Certainly! We always try and aim our sound so that people can dance to it and enjoy it in a live setting. Overall I think it would be great if more people who liked dance and electronic music embraced going to see it live rather than just a DJ playing songs.

Micheal Chugg has been quoted, “They sound like Pink Floyd on Valium”. What do you think of this? {laughs}

It’s pretty funny, I’m not sure if it was meant as a compliment or not! Obviously he is a bit of a legend in the Australian music industry so that fact he said anything at all is pretty great.

You must be no-doubtfully excited about playing in your hometown when you take part in Adelaide’s Parklife. How will that feel after touring the UK in May?

Playing all those shows overseas was amazing and we had some pretty big crowds that were unexpected but coming home playing a festival again will be great. We will be debuting a lot of new material at Parklife so it’s exciting to be able to do that in front of people who already know us and can hopefully see the evolution of the band.

Can you describe what it’s like bathing in Ireland’s sea to keep clean?

Hmm what’s the word – invigorating! It was probably the coldest water I have ever experienced, it literally takes the breath out of you. You just have to commit to plunging your entire body under and then run straight back out again. The beaches are made of stones as well so walking back across stones with freezing cold feet isn’t ideal.
After Parklife, what are your plans?

We have a national tour happening in November going to Brisbane, Sydney, Melbourne and Adelaide that we are all excited about. We have a solid month between Parklife and the tour to write new songs and tighten up the set which will help. After the tour I think we will focus on getting our next single ready for release in early 2012. It looks like there are some good support slots in the pipeline for 2012 and maybe some more festivals over summer. Probably later on in 2012 we are thinking about going to America to try our luck at some industry events like SxSW and CMJ over there and probably do a tour.