YOU MIGHT HAVE NOT have heard of the Aussie band Drawn From Bees but their harmonies have been influenced by some of the great 60/70’s bands such as Cream and ELO. 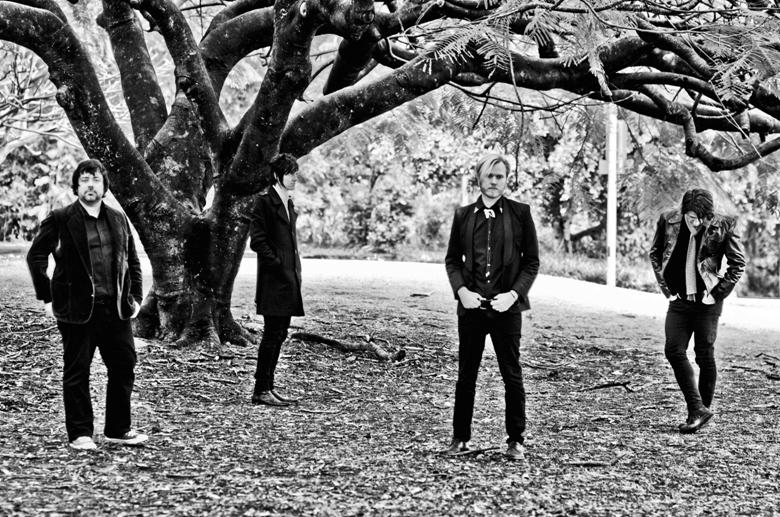 Now that I have your attention, Drawn From Bees are offering their track Dusty Midnight Cowboy from their site so you can get a taste of their music.

Drawn From Bees have been enjoying international success, doing various festivals, even getting praise from Rolling Stone Magazine.

In October they’re doing some shows here in Australia, but before that I have been lucky enough to have a chat with Dan from the band.

Your new single Of Walls And Teeth has very interesting elements. It’s dark, melodic but has a great sound. How did you come up with the sound?

Every song we write is a set of influences smashed together in a washing machine. With walls and Teeth, the whole song was written with the sound of Eric Clapton in mind, I have always loved his guitar sound and have spent more than a few hours in the studio trying to replicate the amazing guitar tones from the Cream records. I also wrote the first verse just so we could use a Clavichord. I LOVE the sound of Clavichords, they make you feel like Stevie Wonder!

Of Walls And Teeth is “about the fight with the wolf and the nasty things anger and ego can fuel.” Has anyone in the group studied psychology or are you great observators of human nature?

None of us are patient enough to study psychology but we are all avid book readers. We tend to spend hours in the tour van either talking about music or books, it sounds really boring but when we get into a comparison of Napolean (Animal Farm) and Stalins Soviet Union things get really interesting and time in the cramped van seems to fly by. Don’t get me wrong though, there is plenty of talk about booze and women too…

Another track of yours is The Wood Fox. Do you have a fascination for animals?

I have a cat and she is awesome! Having said that most of our writing revolves around metaphor and animals are great tools for telling stories, especially when you don’t want people to know that you are writing about them.

You’ve toured America, Hong Kong, London and of course here in Australia! Have you visited your favourite country (besides Australia)?

So far we were blown away by America. It was nothing like our expectations, people in America are so welcoming and so much fun to hang out with. Our second trip to New York ended up being a magical night that started out with our gig at the Bowery Ballroom and finished up with an all night party in strange bars with the city that never sleeps, hanging out with total strangers and having the time of our lives. Our second favourite place is Brighton in the UK which seems to be a hub of all the creativity that has escaped from London because it is too expensive to live in London any more.

You even received praise from Rolling Stone Magazine. With asking the obvious, how did that feel?

I remember getting several text messages and thinking friends were screwing with me… It is pretty awesome to get praise from a magazine that is probably the biggest part of rock and roll history in the world. It is also surreal.

You list your influences Fleetwood Mac, Neil Young, ELO and The Rolling Stones. How have these influenced you with approaching music?

I could sit and listen to the vocal harmonies on Harvest (Neil Young) for days, it just does something to my body that I can’t explain but I am trying to reproduce it. We spend hours in the studio trying to reproduce drum sounds from Fleetwood Mac records or the amazing textures Jeff Lynne recorded for ELO but most of all we are trying to understand their genius, reproduce a a small amount from each artist that inspires us and patch it together to create something that sounds nothing like any of them. These artists also seemed to approach everything with no fear and I like to think that this is how we approach our music writing and recording.

Your videos are out there! Do you have much control over which directions they go?

We are really lucky to have some talented friends that we trust implicitly. Having said that we do tend to interfere and they treat us with the utmost patience and understanding. Craig Amos is making our next video, he has also been working with us from the start with our record art, I love the way his warped mind works and I love making videos with him.

What’s happening for you guys for the rest of 2011?

We will be playing at the Caloundra Music Festival and touring, you will soon see some video blogs coming out of the studio as we are madly writing and recording the rest of the record. We are also hosting our third Masquerade Ball in Brisbane with our friends and I imagine we will be making more videos. We have our work cut out for us in the coming months…

These are the tour dates for Drawn From Bees:

* Thank to Danae from www.remedymusic.com.au for setting up the interview with Dan.