CRAIG WILLIAMS IS A DJ (yes people still call them DJ’s… I asked!) who keeps himself very busy with Djing, blogging and travelling between Australia and LA. 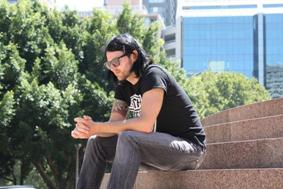 He has remixed tunes for the Aria award winning Presets, Ladyhawke and other groups. Just recently he has signed a two year deal with Bombeatz, a record company based in Florida. He runs his own blog www.craigwilliamsmusic.com as well as all his other social networking sites including his Myspace http://www.myspace.com/craigwilliamsmusic%5Dhis Myspace where you can hear his original tracks as well as all his remixes. Craig is definitely one busy guy!

He has recently moved to LA to be with his girlfriend. In transit I was lucky to catch up with Craig! I asked him a few questions about what he does and what his bright future holds for him.

You’re an extremely busy guy with mixing, blogging, etc. How do find time to do it all?

The short answer is I don’t really {laughs}. I kind of flip flop between tasks. I’ll be making a mix tape then I’ll hear a piece of music that will inspire me so I’ll stop that and go and start making a new track. Or I’ll be making a track and need a break so I’ll start to blog and so on.

Do bands/managers approach you to do their remixes?

I have been approached by a couple of bands the latest one being Mechanical Animal a band from Melbourne. I think we will all be hearing lots from this group they have a really great sound. I also got contacted by a group from the UK to do a track for them so I’m really excited that people are starting to come to me after hearing some of my work.

Is there anyone you’ve worked with who really has stands out in your memory?

I did a remix for a friends band (Tether) what made that really stand out was that the vocal track I was given was really good. The singer has a great voice and it was a pleasure to work with it and make it something new.

Describe a typical day as a DJ? Do people still call it DJing or something else?

No it’s still called Djing but most of the guys that Dj make tracks to so a great part of any free day is making new music to play to remain fresh. A typical day when I’m playing out of town will consist of me just chilling out maybe sending some emails to people doing the admin that I try and forget when I’m back at home. Most importantly finding a nice place to have dinner and then head off to the gig (depending on the time I go on) Play my gig if I’m not heading home early that morning try and get some sleep and then off to the airport.

How much time do you spend in Australia and America? Do you get fresh ideas whenever you travel back and forth?

I have recently moved over to LA with my girlfriend so I spend majority of my time here, which is great I really like it here and it’s something new for me.

You list all your influences on your Myspace and these include Ozzy to Johnny Cash. How do these artists influence you and in what way?

I try and pull inspiration from everywhere I can just about find something that I like in all genres (the music playing at my place is all over the place {laughs}. With these two I love Ozzy because he was one of the pioneers of heavy metal and Johnny Cash did the same for rockabilly and rock and roll. I loved what these guys did for music.

Thanks so very much Craig for taking time out from your busy schedule to answer my questions. I wish you the best of luck for your future!!!!