IN FRONT OF 47,000 people last night and under a beautiful full moon George Michael amazed, grooved and serenade the Melbourne crowd, even after thinking he was still in Sydney, not once but three times. 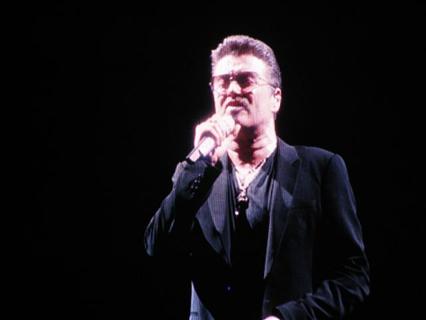 His candor and honesty won the crowd over as he turned Etithad Stadium into one big dance and love rave. He still has the ultimate star power and stamina to play a three hour show. After the Whitney saga, it was even great to hear George, 46, pitch-perfect. He sung while he running across the massive stage (which was bigger than U2’s and that’s saying something!) and he wasn’t breathless ever!

Last night was his last-ever concert after 114 shows worldwide so he said he didn’t “know if I’ll be back so I’m taking this beautiful memory.” It was clear that he was there to have a good time with his audience whom he encouraged to sing and dance at every opportunity throughout the night.

After the interval George apologised for his Sydney slip and then thanked us for twenty-eight years of support.

Unlike his Perth show he included Jesus To A Child and Freedom along with all his hits from the past 25 years. These included Fast Love, I’m Your Man, Living With The Freaks (dedicated to Rupert Murdoch), Too Funky, Faith, Spinning The Wheel, Amazing, Never Gonna Dance Again Let’s Go Outside when he came out wearing a policeman suit and hat.

It was well worth the wait, the traffic around Etithad and the climb to our seats on the third level. George turned the stadium into a massive dance rave for all ages. It’s a shame he strongly hinted that last night was his last! He has gone out on a high that’s for sure.

Below is the setlist for last night:

You Will Be Loved

Living With The Freaks