Skip to Content
Home Gigs Ed’s Night At The Forum

ED KOWALCZYK played to a packed to the rafters at The Forum last night for his only Melbourne show on his Alive world tour. 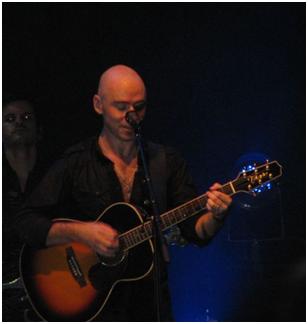 Dressed in a black/cholcoal suit Ed and his new band began the night with tracks from his latest and first solo album Alive. It was very obvious Ed is extremely proud of the new direction he has taken but still is proud of his past.

For me personally I have always admired Ed’s passion; he’s believes taking his audience and almost putting them in a bubble of love, hope and peace away from the world’s problems for two hours. Although on this tour he takes a moment to ask the crowd to consider sponsoring children who are suffering through World Vision. He uses a great agnogy where one night he was doing his “daddy” duties and getting his two daughters glasses of water and he realized some mothers in the world have to decide whether to give their children dirty water or none at all.

Don’t be fooled with Ed’s calmer songs, the guy can still go off when he visits his past with All Over You, The Dolphin’s Cry and Lightning Crashes. By the end of the night his jacket was off and shirt was unbuttoned! He even had his crazy eyes going! (Live fans will understand what I’m talking about.)

It was amazing to discover Ed met his new bandmates just after being in Texas for three hours. His brother Adam who played in Live also is in this band. Together they give tracks like Overcome, Dance With You and The Distance a new sound.

Ed is so grateful to Aussie fans for embracing his first solo single Grace which has had plenty of air-play on radio. He also assured fans that he reads the comments on his Facebook page. He ended the with “Love you Melbourne!”

My Mum and I were lucky enough to meet Ed after the show. He had changed into jeans, a shirt and a woolen vest over the top; leaving his rockstar persona onstage. He was very pleasant to have a chat to! Anyway, enough of my gushing; here’s the set list:

Fire On The Mountain