Jacqui James Leave a Comment on Diesel Rocks The Palms

Diesel at The Palms

TO TELL YOU THE TRUTH I never intended to write a review about this show, as some people have whinged and whined over the amount of Diesel reviews I have done. But you know what? It’s my blog and I can write as many Diesel reviews I like! Anyway last night is worth writing about. 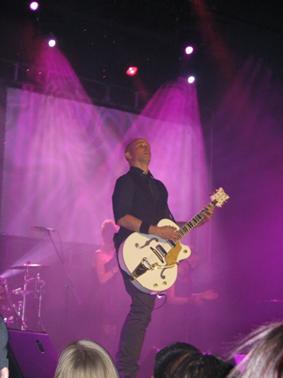 I had been looking forward to this show quite a lot, I even “frocked” up for the occasion. For those who don’t know me, the last time I wore a dress was at my Uncle’s wedding in 2006! Anyway, onto the show.

Diesel came onstage around eight o’clock and apart from having a fifteen minute break in the middle of the evening, he stayed playing until well after eleven.

The night was split into three sections; solo Diesel, Diesel with his band mates Richie on bass and Lee on drums, then Diesel with strings. Diesel joked and said, “I’m Mark Lizotte and I’m the support for Diesel.”

At first the crowd were very subdue, but this was due to the fact that some security guards had instructed them to stay in their seats. Soon Diesel got everyone up and dancing by saying, “Get the fuck up! You own your arses, so get up!” So that’s what we did.

The surprise of the night was when Diesel introduced one of his backing singers as daughter Lilly Lizotte. Teenage Lilly then elegantly sang to Sir With Love. She has such a sweet voice. You could see how much of a proud Dad Diesel was.

Another surprise was when a backstage crew member brought out a banjo. As Diesel explained once he had said he would never play a banjo, but there’s a first time for everything. 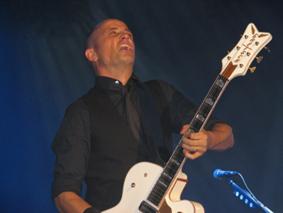 Playing his hits like Junk, Man Alive, Never Miss Your Water and Steal My Sunshine the crowd really revved up and rule of sitting down left the venue. Everyone was dancing, cheering and singing especially after some coaching by Diesel. He also re-visited some songs from his past that some may had not heard for years like Please Send Me Somebody To Love, Never Miss Your Water and Masterplan. Personally I loved hearing One More Time done with an electric guitar backed by the band again.

From his latest album Days Like These he proved how he is a king of imprivsation. The album was only released in August, and yet he and his guitars add new dimensions to them. Please Take My Heart sounded beautiful live in such a venue.

On his Myspace page Diesel sums up the night, “Over the last few years I have been able to put my music into different environments, whether it be solo, acoustic band, electric or with a quartet of strings. Each has its own unique sound and impact on how songs are played. Now for the first time four individual playing styles will get a chance to play along side each other in one night, combining to make an all encompassing diesel experience”.