WHEN HE WAS approaching the big 50, native-born American singer/songwriter Diesel found himself reflecting about his childhood and which music had imprinted on him when was growing up and throughout adulthood.

As a result, Mark Lizotte aka Diesel is releasing his latest tastey offering “Americana” today (Friday, July 1s t, 2016). “Americana” bares 13 classic tracks from artists and bands whose music has influenced Diesel to become the artist he is today. 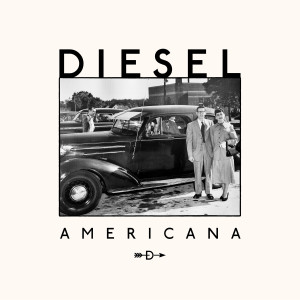 The Aussie rocker and a versatile artist has always loved pushing the boundaries and reinventing his own classic tracks, especially during his live gigs. Now on “Americana”, Diesel has carefully and craftily put his own spin onto classics that can be found in most peoples’ music collections. These include “Born To Run” by Bruce Springsteen & The E Street Band, “Rave On” by Buddy Holly, “Queen Jane Approximately” by Bob Dylan and the quintessential guitarist’s dream “Born On The Bayou” by Creedence Clearwater Revival.

Thankyou very much Mark and his team for reaching out wanting to chat to me. I feel quite honoured.

G’day Mark! How are you? Thankyou very much for reaching out and asking if I would do another interview with me. Congratulations on your upcoming release “Americana”. This album is a primage of your heritage and songs/artists that have influenced you. Was it difficult narrowing down to these 13 particular tracks?

Hi Jacqui! I spent a very short time (about three days) picking the songs, I had to approach it like someone on a game show grabbing as many dollars as they could with a wind machine blowing! If I didn’t do this, the process could have gone on forever. I also was excited and wanted to record sooner than later!

Happy birthday for last month!!! The BIG 50! (and since we’ve known each other since you were 26…I was around 15 when we first met and next year I’m 40)– It made me feel soooooooooooooooooo old! {winks)

Yeah! It just creeps up and taps you on the shoulder! Yikes!!

When you dissect each track on “Americana”, did you discover new meaning of the songs?

I really felt a lot of things when I got into singing these tracks. Lyrics that I’d heard so many times suddenly had new meanings as I applied my own spin on them. I guess taking the liberties that I did with the arrangements and sonic treatments made them feel more “personal” to me.

“Hank’s Dream” came as a complete piece in a dream after three days of terrible jet lag in NYC. I thought it would be a great way to intro the album. “Hank” being the short for my Father’s name “Henry”.

So many images flashed through my mind while listening to “Americana” like “Rave On”, and the summery “Here Comes My Girl”. Was it fun creating different atmospheres for a while?

I love to explore what I can do with guitars with each record I make and these tracks were such a great platform to build on. I think in some cases; it’s the ideas that have probably been swimming around my head since first hearing these songs.

As a HUGE Bruce Springsteen fan (I mean, you are #1 then ‘BRUUUUCE’ is #2), you were very brave to take on “Burn To Run”. Do you ever get intimidated covering The Boss, Hendrix, Johnny Cash, etc?

Of course there was a feeling of intimidation at first, but as the tracks started to take on a life of their own it faded. I found it surprising that there were so few versions of a song like “Born To Run”, it’s such a great song…

Talking about perhaps awkward moments, I witnessed you being the recipient of hecklers at a suburban Victorian hotel a few weekends ago. My sister, friends and I just loved how you handed them. Does this happen often and does this differ you from going back or is this part of the touring?

{laughs}! Yes, hecklers… I guess it seems like a good idea at the time to open up your mouth (especially after a few beverages). I have developed, over a span of time doing so many solo shows, a kind of school teacher approach when people want to yell stuff at me. I find it effective to “turn the mirror” in those situations.

At this gig my sister, friends and I went to, you did Hendrix’s “Hey Joe” and you were in your element. Do you ‘channel’ the great Hendrix?

Hendrix opened my mind to a free way of playing, I can’t imagine a more fluid player. I wouldn’t have imagined ever doing a Hendrix song with an electric guitar “solo” but it actually allows me to stretch out and for the audience it’s kind of a deconstruction of the electric guitar, something they normally might not get so intimate with.

I also noticed at the last couple of gigs I’ve gone to, you use your thumb to play some of your guitars. Is this a special technique you use to create a particular sound?

I started way back using my fingers/thumb when I was too lazy to find a pick, mostly laying on my bed with my guitar at night as teenager. The subtlety with your fingers and thumb goes beyond a pick for some things. Jeff Beck has certainly proven this!

“Circle Game” by Joni Mitchell is the first song you can remember from your childhood. Can you remember what you were doing when you heard it?

I remember my sister singing it (she had the Joni Mitchell album) and me singing it in the tub. It’s a beautiful melody that has stayed with me.

Knowing you as a work-aholic, you’d be working on another project. Am I right?

Yes, I’m starting to put some ideas together for another album, I was actually about to start when the idea for “Americana” came about, I could not resist the opportunity!

Purchase AMERICANA on CD from
JB Hi-Fi  or Sanity

You can catch Diesel on his Americana Tour at these dates: