ONCE AGAIN IT’S been a pleasure to discover a home-grown young and extremely talented singer/songwriter and guitarist who is a very intellectual artist beyond his twenty-three years.

To his name, Daniel Champagne has been a Triple J Unearthed Artist and he has played festivals both here in Oz and Canada. 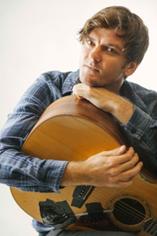 Daniel is one of those artists who is always putting pen to paper.

Through difficult times he found himself writing on the road. His second album Gypsy Moon is full of tracks that mirror Daniel’s statement, “searching for something that may or may not actually be there, and just putting all your faith on the line as if it is. This rings true through all of these songs” sums up the vibe of Gypsy Moon.

Besides being wiser beyond his years with writing songs about faith and the sad loss of a friend (Highway’s Hold) and the fight within (Heart Within In). Before I knew he had travelled to Spain, I could hear Daniel’s Spanish sound in Deeper Well from Gypsy Moon.

Here’s the video for Daniel’s latest single Heart Like This:

I urge you to check out Daniel’s site and Facebook. A very big thankyou to Daniel for showing himself as such an intelligent and gifted young man in the following interview. Also thankyou to Heapsaflash.

For a twenty-three year-old you play acoustic guitar so magically. When did you get a hold of your first guitar?

I was five or six years old. My Dad played so I did too as soon as I could pick it up…I haven’t really put it down since.

Your lyrics on Gypsy Moon show that you’re a thoughtful young man. Are you one of those artists who get up during the night to jot down ideas?

No I’m usually just up all night, seriously. If I get back to the hotel room at 2am after a show and I feel there some creative stuff coming in then I’ll just sit there till daylight writing it out…It’s a little selfish because I know that I wake innocent travellers in the next room up all the time but it’s worth it for the songs I think.

When you left school at eighteen, were your parents supportive of your music aspirations?

Yes, they never pushed at all but were just happy for me to chase what I wanted to and I guess they knew I’d learn from it, for better or worse by doing it. They still are like that with me.

Where did you record Gypsy Moon?

Mostly on the far South Coast of NSW, (where I’m from) at a small studio owned and operated by a dear friend of mine. It took about ten days I guess but in between tours and then I did a few little things down in Melbourne.

Highway’s Hold is a beautiful track featuring a string section which deals with the topics of friendship, death and traveling. Do you see life as one big long highway? 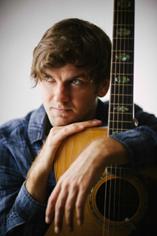 I literally spend most my life staring at a highway in between gigs each day. But you mean metaphorically I guess. Not really, I don’t see life as anything in particular…Just take it as it comes and do what feels right.

Listening to Gypsy Moon I can hear your passion for songwriting. Did some specific event make you start writing?

Nothing specific, just a yearning…and that’s still the same now. Deeper Well is one of the more upbeat tunes on the album and in fact I thought it has this Spanish sound to it.

Have you travelled overseas at all?

I have, to many places touring over the last few years but never Spain. I go there for the first time in a few months on a bit of a pilgrimage with my old guitar teacher. The instrument does come from Spain you see so I thought it was about time I went and took my playing home.

How is your Gypsy Moon national tour going?

Very well, other than writing a hire car off on the first night! We are only at the beginning though so there’s lots of places and people to look forward too.

What excites you the most about your future?

Living, learning, travelling, playing music and hopefully holding down this job that lets me do all this every day.

You can catch Daniel’s Gypsy Moon national tour on these dates: