DALLAS FRASCA AND HER band are unafraid to speak out! In fact they brought forward the release date for their fully charged new single Lizard Boy which highlights issues being debated in Australia, including same-sex marriage and immigration. Lizard Boy encourages people that it’s “time to rise”. 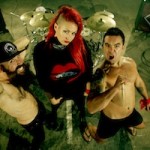 Dallas has a Janis Joplin vibe; she has a rough smokey voice that drips attitude and emotion. I urge you to listen to All My Love on Dallas’ Soundcloud; it’s one very cool track. Actually if you listen to all their tracks, you’ll hear the versatility of Dallas’ voice going from soft to totally rocking out!

Love Army is Dallas Frasca’s upcoming album (due to be released in mid 2014) and it follows their overseas experiences traveling to unbelievable places like Paris, London to camping by a fire in Queensland.

Dallas’ tour started on Friday, but if you wish to check out one of their acclaimed live shows around Australia, please keeps reading.

Thankyou very much Dallas for your time! You’re now in a band and have just released your rockin’ new single Lizard Boy which you describe it as a political statement. What issues are you passionate about?

Lizard Boy is a politically charged beast and the collective consciousness of the entire band aligned. We don’t agree with the authorization of dumping of three million cubic tonnes of dredge soil in the barrier reef, we think a much fairer go is needed for asylum seekers (we’re all immigrants too right?), we think same sex marriage rights should catch up with the majority of the world, our old growth forests should be protected and the list goes on. This song is a voice for the people, I’m sure we’re not the only ones who feel like we are being misrepresented with many of the present issues we are facing in this country.

While writing for your upcoming album Love Army, which was recorded in Melbourne, did you draw from your experiences traveling overseas?

There are many themes across the album, the whole band have been fascinated by the popular ideas that shape-shifting reptilian people control our world by taking on human form and gain political power to manipulate our societies, some of the other themes include Nordic Mythology, French history, Cognac, Motorhead songs, David Icke, Animal rights, Drug induced suicide, the music industry, Self Image, Sea Shepherd, love, artist friends in Brixton, recycling, humanity & each other.

We lived in a small apartment in Pigalle (red light district of Paris) last year and moved around a lot during our touring in Europe last year (we spent almost a third of a year abroad) so we wrote songs whenever and wherever we had a chance, we were heavily influenced by our surroundings. From haunted 16th century French mansions, the tour van around Switzerland, grimy basement cubicles in Soho, London…

Earth, Wind & Fire wouldn’t be in my guesses of bands you’ve supported! How was that, compared to supporting Aerosmith, Billy Joel and Van Halen?

{laughs} I think you mean, how did rock versus funk thing I think you mean? The gig was enormous we played to well over 50,000, (the biggest crowd we have definitely played as a band) at the Le Mans 24hr Circuit last year in France. The French are music lovers and very open-minded, was a huge honour to share the billing with those guys.

By looking at the photos of your live shows, you guys totally go off! What is the best about performing live?

Letting go, expressing yourself, crowd surfing, the adrenalin rush you get, the energy exchange and human interaction between a heap of people thrown together to have a good time and celebrate life!

I love your upcoming name of your tour ROCK F#@KING ROLL NATIONAL TOUR. Needless to say your music from Love Army packs a punch?

You’ll have to wait and see when the record comes out mid 2014…{giggles}, until then you can get a little taste from our first single, Lizard Boy.

I wish you and your band the best for the release of Love Army and your upcoming tour.