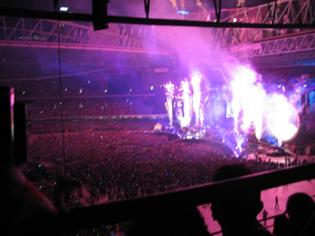 ON A VERY CHILLY Melbourne night Coldplay absolutely wowed around 50,000 people for a solid two hours with a giant stage, five circular video screens (which had special effects added to them for particular tracks), fireworks and inflatable objects around the stadium. But the most impressive aspect people got wristbands and before the concert begun people were instructed to turn on them. Unbeknown to us we didn’t know how the wristbands played such an amazing experience throughout the concert.

From a big Back To Future fan, one appreciated the theme played when the Stadium’s lights were turned off. Suddenly the instrumental Mylo Xylo came out of the speakers and fireworks shot up at each side of the stage and peoples’ wristbands started flashing. It was extremely overwhelming moment and such a beautiful view of everyone!

Chris Martin has definitely come a long way since performing in smaller venues, although the whole band has kept their down-to-earth and humility. The massive crowd didn’t phase Chris as he kept saying “Is there anybody out there?” to hear the masses of fans scream.

Even though there were 62,000 fans last night, Coldplay’s heartfelt lyrics still stuck a cord. The Scientist was the biggest sing-along I’ve heard, even after seeing U2 at Etihad a few years ago last night Coldplay had the louder crowd. Personally Warning Sign from their 2002 album A Rush To The Head was the most moving song of the night. 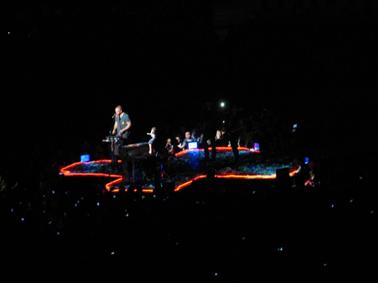 Although, there was one thing on Chris has obviously embraced. The F bomb!! Until last night I had never heard Chris swore yet alone the F bomb! But he still managed to use it in a positive context such as “We’re so grateful…” (because it was a Tuesday night and the traffic was insane). “We want to play best fucking concert!”

Several times Coldplay switched their songs up. Yellow is one of their iconic songs, but Chris just played his piano and sang in a deep falsetto for the first version with the crowd as his backing singers. Then Coldplay leapt into the normal version. God Put A Smile On Your Face turned into a real rockin’ tune and as a true signature the end of a rockin’ song a guitar got smashed onto the stage at the end!

From the main stage there were three long walkways and at the end of one there was a X where the band often gathered. For Princess of China the band gathered on the X while on the video screens it showed Rihanna si 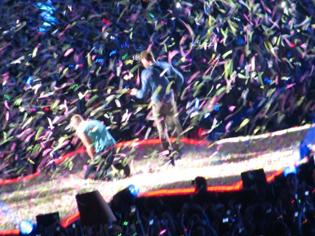 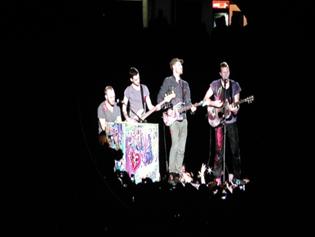 Surprisingly, Paradise has been Coldplay’s first Australian number one. The night was full of surprises, but after the band left the stage to prepare for their encore, they were about to give us another surprise! They appeared on a small stage; one after one where they performed Us Against the World (when they made a joke about stuffing up the start) and Speed of Sound.

Instead of going through some secret tunnel, the band ran on the outside of the standing area on the turf back to the main stage where they did another three songs; Clocks, Fix You (accompanied by amazing fireworks), M.M.I.X. and Every Teardrop Is A Waterfall. Before leaving the stage, Chris knelt and kissed the floor.

Last night Coldplay set a new benchmark for massive groups to make their concert interactive for fans. The night will be in the minds that experienced it for a long time.

God Put a Smile Upon Your Face

Princess of China (Rihanna on screen)

Don’t Let It Break Your Heart

Us Against the World

Every Teardrop Is a Waterfall

Keith Wants To Escape Together