IF YOU WENT to Melbourne’s Pure Gold Live on Friday or Saturday night you were treated to a phenomenal line-up of twelve Aussie acts in four hours! It reminded us of the “olden days” where we had a healthy rock/pop culture and pub gigs were a part of our lives! 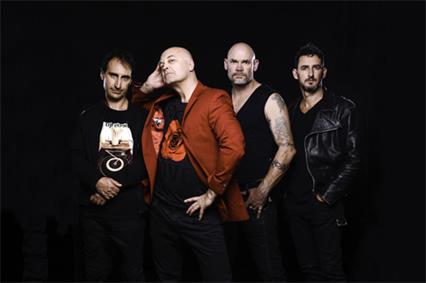 The first act onstage was Chocolate Starfish. In the 90’s they had two Top 10 albums and six Top 50 singles including their debut smash hit “You’re So Vain”. Back in the day Chocolate Starfish had the reputation for being one of the hardest working bands in Australia, once playing twenty-two gigs in a row.

On Friday night it was quite obvious they were absolutely enjoying themselves playing together again at Pure Gold Live, playing to the sold-out Palias Theatre crowd. Adam Thompson with his bandmates Darren Danielson, John Nixon and Norman Falvo rocked the sold-out 2,000 crowd. They were determined to make their two set songs “Mountain” and “You’re So Vain” stretch over their allocated time!

Before the Pure Gold Live gigs, Adam kindly answered some questions. As I predicted, he is very sweet and is an open book. So thanks so much Adam for your time.

G’day Adam! How are you? I’ve regularly seen you on TV and thought you’d be so cool to interview, so thanks for your time. Chocolate Starfish were one of my favourite 90’s Aussie ROCK bands! Do you miss that era when Aussie pub-rock ruled?

Thanks Jacqui for the recognition of the band. I guess it is relative to where we are at in life, as a band, at the moment. You can mourn what way sin terms of the ‘glory days’ but it only comparative to personally what else we have going on in life. If I was twenty and you were asking me the same the question, I am sure I would be looking at past eras thinking they had more opportunities. There is definitely a difference to the way today’s bands have to approach music, and I guess like all eras you have to look at it for what it is and work within its constraints.

What has been the craziest, out-of-control gig you guys have had?

I think there have been many crazy gigs we have done. Personally each gig was an adventure of calculated risk taking (climbing scaffolding, church rafters, lighting towers) to stage diving and cutting my back open back in Newcastle in 94. Others were out of control in the energy form the crowds. I remember a couple of large pub gigs in a place in Melbourne called Transformers, where the audience were electric and of course that elevated us to even greater heights.

“You’re So Vain” was of course your debut smash hit. Looking back now, are you happy with the song choice, or do you wish you went with “All Over Me” which was one of your originals?

No it was a great choice. Many bands got and still get lost in the ether for their choices. I think it heralded us and nothing more. A hit Is a hit and you take them anyway they come. The album was as well, as a result of releasing “You’re So Vain” first, so I think it was a wise move.

After twenty plus years, Chocolate Starfish have recently released an EP called “Primitive”. What made you guys decide to want to make music again?

There were several things that made “Primitive” come to life. Before Zoran’ s passing he and I had begun writing again after a long hiatus, so we were genuinely excited about being creative again together. It was also cathartic to explore this as men rather than ‘boys who thought they were men’ back in the 90’s. I am certain we would still be writing more as a team if he was still with us. In saying that I am glad that Tim Henwood who co-wrote with me on the EP is around because he and I also create well. It is obviously less about sales and more about statements in music these days, so the EP definitely reflects statements on how we feel as musicians/writers in 2015.

On “Primitive” there’s a great track “King Of Blues”. Did you write the track from your experiences as a singer/songwriter/performer?

No it actually isn’t entirely about that at all. “KOTB” is more of me coming to terms with anxiety and depression, a situation I fluctuate in and out of. It is a condition of this challenge where you can feel like a king sometimes and then 24 hours later you can feel flat. This gets magnified even more as an entertainer, and the rise and fall of emotions in that context.  Long live the King!

The track “January” on “Primitive” is a very positive song. Does this sum your outlook on life now?

“January” is a song I have toyed with for few years. It is my offering as a latter day Auld Lang Syne.. John Lennon modernized Christmas with so this is Christmas, but we have never really had a modern day NYE/New Years Day song. Maybe welcome “January” could be that anthem for all. It is a New Years wish for me anyway

Chocolate Starfish are back doing gigs until August! Are you guys causing trouble or drinking cuppas in your tour bus?

Yes we are doing everything from Chocolate Starfish presents Bat Out Of Hell, to a couple of “Primitive” EP/Heritage  song concerts , to finally some acoustic dinner and show concerts. There is  a balance now between cups of tea/alcohol and band give and take, but balance is good. It is why we are still doing this, because we understand balance. Well that IS the theory anyway… Pour me another Long Island Iced Tea and let’s get onstage…. Mr Chocolate!!

You can get your 90’s Aussie rock on and see Chocolate Starfish at: