LAST NIGHT CHISEL DID what they do best – ROCKED! Once a pub band Cold Chisel performed to thousands last night at Rod Laver Arena.

The introduction was a radio changing stations to different decades. As soon as iconic frontman Jimmy Barnes came onstage he controlled the crowd urging the crowd to stand up and clap.

Unlike their pub days, last night I spotted a few youngens (under 12) who were brought along with dad! Hopefully they’ll continue the tradition with their future children because after all the drugs and alcohol consumed by the band, Cold Chisel will be around for another thirty years! 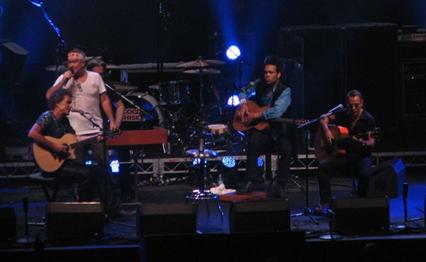 They began the set with Standing On The Outside and then Shipping Steel. The arena turned into the one giant karaoke bar. Choirgirl and You Got Nothing I Want were other big sing along.

Like Jimmy’s typical occkaism he asked the crowd “How the fuck are ya?” and introduced their new drummer Charlie who replaced the empty seat from their beloved bandmate Steve Prestwich who passed away from cancer in January. Later in the night they did an acoustic set with When The War Is Over which was dedicated to Steve. Jimmy said every set will be dedicated to Steve.

Mossy’s voice is still as good as ever! When he sang My
Baby it sounded so smooth even more with a sax added to it and if you mix that with the fact he’s one of Australia’s epic guitarists, it’s magic!

Jimmy told us a funny story about the iconic headband Jane (his then girlfriend, now wife) gave him which he wore on the band’s huge East album. Ten years later guy told Jimmy he wore it upsidedown. Rising Sun was about Jane leaving him.

I was surprised how many Chisel songs have blues elements in them! Then when they leapt into Breakfast At Sweethearts they added a regae feeling to it.

During the night they did tracks during from their upcoming new album (including All For You dedicated to Steve) which is due out in April. 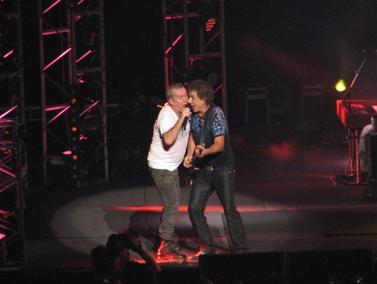 Jimmy and Mossy’s bond is very evident still after thirty years as a band. They may have had private (or not so private) disagreements but they’re still best buds who stood shoulder and shoulder last night.

It was a real privilege to hear Flame Trees live by its original band. Once again, Rod Laver Arena became one huge karaoke bar. Continuing with the karaoke theme, the next song was the song what would have to be the most popular Aussie song to sing with mates. Like it was an anthem, everyone stood for Khe San. Chisel were on a roll and did their rockin’ Bow River.

In the encore the band did Saturday Night which captured Mossy’s soulful voice. It had a beautiful moment where Jimmy and Ian were singing arm in arm, both pouring with sweat. Jimmy ended up the night with saying, “Thank you very much Melbourne. It won’t be another thirty fucking years til we see you again!” For the encore the new drummer Charlie wore a white t-shirt which said PRESTWICH on it and he gave a clap to the sky when he was leaving the stage.

When The War Is Over

You Got Nothing I Want