Skip to Content
Home Gigs Buble Gets Crazy In Melbourne

Jacqui James Leave a Comment on Buble Gets Crazy In Melbourne

Last night Michael Buble introduced a side of himself that we haven’t seen before! We had seen the smooth, sophisticated and suave Buble on TV, but never would have expected a mischievous larrikin who loves to joke around and make fun or as the Aussies say “take the piss” out of people and himself. 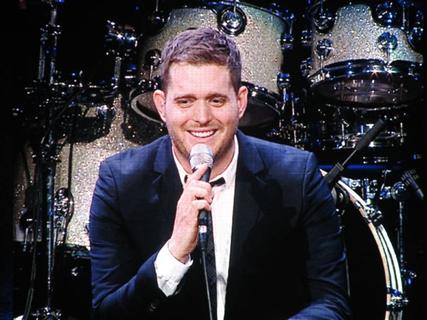 At times you felt like there was only you and Michael in the room, other times you were witnessing an artist being back by a big band complete with a brass section and a grand piano. Micheal said how each of his bandmates are like brothers to him and when he introduced them he sure did make fun at their expense.

After launching with Cry Me A River Michael says “Hello Everybody!.. What’s up Melbourne… Number two show is better!” and joked about the fact there was an Iron Maiden concert going on at Hisense Arena (actually I couldn’t print what he said!) After had singing along to You’re My Everything, Buble admitted when we sing he wishes he could shower with us.

Often perceived as older than 35, Michael reminded us he’s only 35 and was into Michael Jackson during the 80’s! (weren’t we all?). He did Billie Jean while showing off his moon walking skills, showing how versatile he is. At one point he leapt into I Got A Feeling by The Black Eyed Peas. 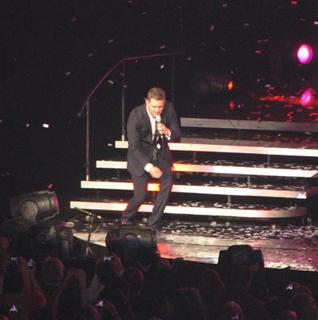 One of the musical highlights would have to be Feelin’ Good! With such a great band behind him and with such a powerful voice it sounded fantastic! Along with his charismatic moves it was a highlight for sure!

But he left the absolute highlight of the night for the last song which was perfectly A Song For You. After coming back out after the previous song, Michael sang with no mic in front of a white curtain which again made the atmosphere even more intimate. In all my years of going to shows at Rod Laver Arena, I have never felt so close to an artist before.

Michael might enjoy being a comedian and having fun but he doesn’t take his success for granted, and appreciates his fans for spending their money on his tickets. He said “I appreciate you, (you were) bloody brilliant” as he bent down to shake audience members’ hands.

Cry Me A River

What Did You Think?
Mack The Knife

World On A String

For Once In My Life

Some Kind Of Wonderful

I Got A Feeling/Haven’t Met You Yet

Me And Mrs. Jones

A Song For You