Skip to Content
Home / Gigs / Bryan Gets Raw To The Bones 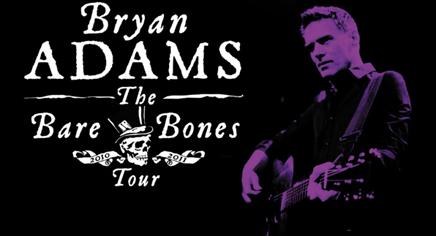 As a typical rockstar Bryan was fashionably late and there was no photography to be taken (although towards the end of the night there were noticeable flashes going off). He proved he still has the stage presence when I saw him in the 90’s. As Bryan entered the stage he wore a top hat then he laid on the front of the stage.

With his acoustic guitar and tight jeans (yes ladies, he still has a cute butt) he started with his massive hit Run to you and straight away his voice sounded as powerful, maybe more powerful than years ago. From the word go Bryan and the audience bonded as throughout the night some people yelled out compliments and requests. Bryan replied with joking with them.

For Back To You Bryan brought out his pianist Gary and Bryan played the harmonica which sounded great. Later in the night Bryan explained how his highly successful MTV Unplugged album was supposed to be low key but there ended up having over twenty instrumentalists onstage; yet jokingly said it’s his favourite album because it only took a day to make.

The 52 year-old who recently became a first-time Dad told the lively audience he had the idea for Bare Bones Tour two years ago, but then when performed I’m Ready he joked about the fact he had written it at the age 18 how it felt like it was only yesterday.

I had forgotten about some beautiful tracks Bryan had released over his career. Last night I was blown away with his performance of Do I Have To Say The Words. This song was one of my favourites from his arguably his highest selling 1991 album Waking Up The Neighbours and last night the song still moved me.

When it came to singing Everything I Do I Do It For You the whole audience became his backing singers, but were consciously not overpowering Bryan. At the end he blew a kiss.

Continuously he teased the anxious crowd who was waiting for Summer Of 69. He always finds it funny when people yell out 69! He revealed that Heaven was originally written for striper movie when he was twenty-three so he appologised to couples who had Heaven as their song.

Please Forgive Me has always been a serious ballad but last night in the second verse Bryan sang it with a really strong country accent. It was a pisser! He isn’t bad at an Aussie accent either.

He started writing Let’s Make A Night To Remember in Brisbane and when he left Australia 90’s left to Jamaica where intentionally he was going to stay for a year to write, but ended up staying for several years.

This would be my latest favourite quote – “Songs are little seeds of inspiration”. I couldn’t agree with you Bryan!

As it was bound to be Summer Of 69 o’clock was when everyone stood up and sang loudly. The last song was Straight From The Heart then Bryan promised it wouldn’t he another six years. He picked up his top hat and left the stage to a standing ovation.

(As previously said, unfortunately there was no photography allowed)

How Do Ya Feel Tonight?

Do I Have To Say The Words

Let’s Make A Night To Remember

Still Beautiful To Me

In The Heat Of The Night

Not Romeo Not Juliet

Everything I Do I Do It For You

The Only Thing That Looks Good On Me Is You

Death Of Me? Friend In Me

Have You Really Really Loved A Woman?

No Time For Love

Straight From The Heart

A Relaxed and Comfortable Darren Hayes