BRYAN ADAMS DEFINITELY showed how it’s done last night at his only Melbourne show. For two and fifteen minutes he and his reunited band rocked Rod Laver Arena!

Bryan’s amazing support was Amy Macdonald from Glasgow. Incredibly Amy is only 24 and has three albums to her name and this is her first tour Downunder! She explained how humbling it was to sing Scotland’s national anthem before football games. Her music is very catchy and is a mixture of folk, rock and pop-country. I think it’s safe to say she has won Aussie fans as she got the crowd clapping. She did an amazing acoustic cover of Springsteen’s Dancing In The Dark. Hearing it sung by a female vocalist definitely added a different but great sound to the song. 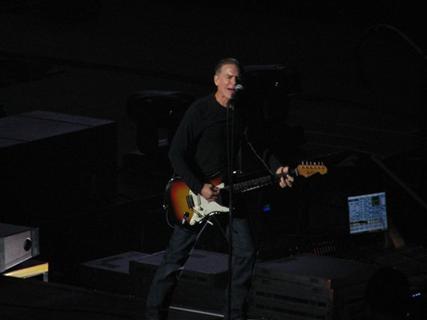 At 8:30 Bryan came onto the stage with his hands in the air like he was indicating he was ready to rock. I’m unsure what happened in the early 00’s but Bryan didn’t tour with his original guitarist Keith Scott and drummer Mickey Curry, so when people saw they have reunited on this tour it lifted the mood even mood! I must say Keith hasn’t lost his “magic fingers” as Bryan called them and during the acoustic set Mickey used plastic tubs, metal pots and pans to create this really cool and unique sound! During Hearts On Fire Bryan and Keith had a guitar-off which was funny to watch. To convey his delight to be back in Australia playing arenas Bryan said, “Ladies and gentlemen, it’s great to be back.”

I was blown away when Bryan announced this tour is a late celebration of the 20th anniversary of Waking Up The Neighbours. How time flies? This album was shamelessly flogged to death in my CD player and as Bryan and his band played songs from it, it was a reminder how bloody good the album was and the songs still stand up today.

At 53, Bryan is as cheeky as ever and he and Keith have so much fun together. The chemistry within the band was lovely to watch. Over the years Bryan has been big on crowd participation! He was blown away when the crowd sang Everything I Do, I Do It For You when people raised their lighers and mobiles up in the air singing loudly. At the song’s end Bryan blew three kisses to the crowd. During Rescue Me Bryan went into one of the side stalls with no security around him. When introducing his band Bryan proudly boasted, “That’s my boys, that’s my boys!”

Another lovely moment was when Bryan chose a lady from the crowd to join him to sing When You’re Gone. He actually invited one lucky woman onstage to do the duet When You’re Gone. He did a shout out to old friend from London who was in the crowd Please Forgive Me saw the arena erupted in song without any prompting from Bryan.

After sixteen albums, countless hits Bryan ended the night with two special performances which were Straight From The Heart with him on acoustic guitar and harmonica and All For Love when Bryan asked everyone to raise their mobiles so the arena turned into a sea of lights.

Bryan and his band proved age doesn’t stop you from rockin’!

Can’t Stop This Thing We Started

Have You Ever Really Loved a Woman?

If You Wanna Leave Me

The Only Thing That Looks Good On Me

Straight from the Heart