ON MYSPACE SOME GREAT ARTISTS have contacted me, but Rod Davitt has always been genuinely friendly. So it’s a real pleasure to review his band Monkeytin’s album titled Brave. 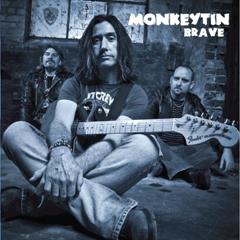 Brave captures Monkeytin’s pub-rock sound with raw drum beats and guitar twangs. On the flipside, it’s the perfect album to take away to your favourite beach spot and chill.

With honest lyrics such as in the titled track Brave you know that Monkeytin are a real Aussie band who have experienced the highs and lows in life. Listening to Brave I kept getting a Powderfinger vibe with the raw, not heavily produced sound. I love Crash And Burn; this bluesy rock tune made my toe tap, but my favourite track is Fuck It All because it basically is about saying just that when you have had enough!

Monkeytin are unsigned but are constantly touring. You can check out their tour dates and more importantly purchase Brave from their Myspace page http://www.myspace.com/monkeytinmusic

I give Monkeytin’s Brave three frangipanis out of five!