Skip to Content
Home Interviews Boy & Bear Have No Limits

Jacqui James Leave a Comment on Boy & Bear Have No Limits

INDIE SYDNEY ROCKERS Boy & Bear are back! On Friday (October 9th) their brand new album “Limit Of Love” will be released globally! 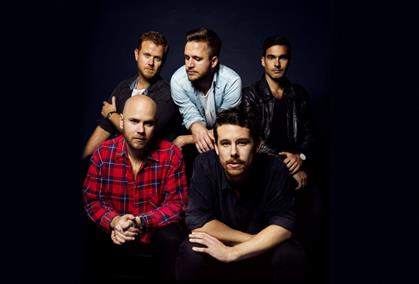 The album teaser is full of versatile tracks which contains  sound smooth, rocky, edgy and melancholy tunes. The five lads Dave Hosking, Killian, Tim, Jon and Dave Symes. The band all contributed to the songwriting and when it came to recording “Limit Of Love” the band went old-school, recording tracks to tape.

The first single from Boy & Bear’s third album “Limit Of Love”, “Walk The Wire”is a little catchy pop tune. The video is very quirky and funny, taking the mickey out of SGI and green screens. As Dave H said, “It is quite a light-hearted track for us, which has been fun,” explains vocalist David Hosking. “It’s about the internal battle that happens when you’re summoning up the courage to approach someone you like, I guess the broader sentiment is ‘don’t die wondering’, you gotta put it on the line sometimes and go for it!” You can watch the video of “Walk The Wire” below. (Just a warning, it contains adult themes!:

You can pre-order “Limit Of Love” or go out on Friday to purchase the album. You can also catch the guys touring nationally from January to February in 2016. (Boy & Bear’s tour dates follows after the lovely chat with the guys.)

Hi guys! How are you going? Congratulations on making a really catchy tune, “Walk The Line” which is totally different to your previous stuff. Was this a conscious decision to take a different direction?

{It} wasn’t a conscious decision, nothing often is as an artist, you just follow what’s feeling good to you at the moment and rely on gut instinct to create something that you are proud of and feel represents where you are at at the time.

The video for “Walk The Line” is very clever and funny! Were you trying to get across the notion if you complicate everything with special effects, you lose the song?

Thanks, the idea was to have a little stab at the over production of art in modern society. Everything is made ‘perfect’ and highly produced these days. I can’t help but feel like the soul/mojo has been lost somewhat.

Can you tell us about your upcoming album “Limit Of Love”? What can we expect?
Well the record is basically more stripped back and raw than anything we have done before, but a much larger emphasis on energy and performance was at the heart of that decision. We wanted to record the band live, and replicate what we sound like live. It has more up-beat rock songs yet still some classic dark melancholy numbers which we all enjoy. {smiles}

You approached recording “Limit Of Love” like you were playing live. How you did find doing this?

At first it was an overwhelming idea, by recording live to tape (no computers) meant no editing, so you knew you had to give your best performance. It actually became liberating very quickly though, as it simplified the recording process, and removed the never ending amount of choice we are all so used to.

Unlike your previous albums, you shared the songwriting. Did collaborating with each other bring a different energy to the album?

We have always collaborated as a band, but this record to a higher degree than we have before. Having songs birthed and completely written as the whole band generated some really exciting results for us this time. We have tried it before but didn’t nail it. Songs like “Walk The Wire” were completely written as all five of us.

You say Boy & Bear have a personality. What types of characteristics would you say the band has?

Personality is something everyone has when they create something that represents them. Not sure what the traits are, but it’s in the performance of the song, something that makes you say “that sounds like Boy And Bear”.

Are you guys looking forward to touring EVERY state of Oz in January/February?

Always enjoy touring and playing live, as we have had a bit of time off the road now, {so} we are super keen to be getting back to Australia and playing shows this summer!

Thanks Dave H, Killian, Tim, Jon and Dave S for your time chatting to me! Good luck with “Limit Of Love” and your Aussie tour in January. 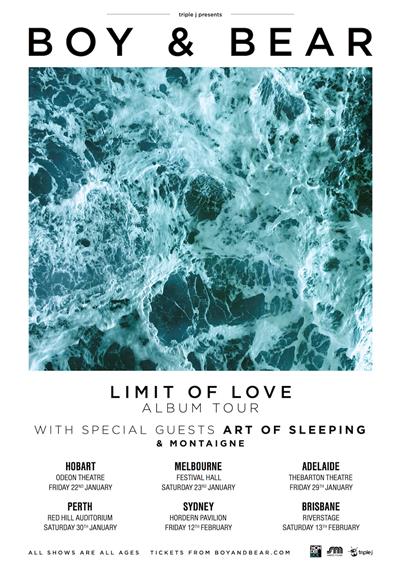