THE WORDS BOOM CRASH OPERA brings fond memories from peoples’ youth, including my own. The band and their songs were just fun! (Oh, oh onion skin…)

Over thirty years ago Australia was lucky enough to have the birth of this group of talented musicians and songwriters who dominated the charts with their rock-pop tunes. These tunes are still fondly attached to peoples’ memories of a specific summer, their school days or first love. 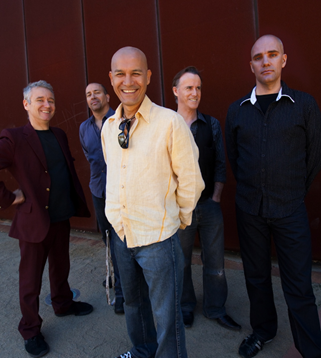 In 2014 Boom Crash Opera have reunited with a bang! They have released their latest greatest hits The Best Things as well as a four album box set, Rattle It Out, containing the band’s first three albums digitally re-mastered and a bonus fourteen-track rarities disc of never-before-released material from the 80’s and 90’s.

Just last weekend they performed at the Between The Bays Festival in Frankston, Melbourne and by reading comments on BCO’s Facebook the band and their fans thoroughly loved the experience. They’re in fact touring Australia until April. (see below for the dates)

When the opportunity to interview one of the guys from BCO through www.onthemappr.com, I was like a kid bouncing up and down saying “Can I? Can I?” because I remember singing Onion Skin at the top of my lungs as a ten year-old! So I’m very grateful to Boom Crash Opera’s drummer Peter ‘Maz’ Maslen for being such an open book.

It is a real pleasure to chat to such Aussie rock icons! Thankyou Peter for your time! What made you decided that 2014 was the year to release your newest boxset The Best Things, four album box set, Rattle It Out and do a national tour?

Well, our master recordings reverted back to our ownership in late 2012. Liberation (our new record company) were interested, so lawyers spent months tooing and froing before we settled on an agreement that both parties were happy with. It’s a slow process and took until now for everything to be in order.

‘Rattle it Out’ is a 4 CD compilation of the first 3 albums and an extra album called ‘The Lost Things’ which is an album of BCO rarities!!

Seeing you guys live a few years ago, you still have the fun chemistry! When you reunited after all those years to make your 2009 acoustic album Dancing In The Storm, was it difficult or like riding a bike?

Like riding a bike. It’s because all of us are still very active within the music industry. Dale and I make a living out of performing as do the others to varying degrees. We toured incessantly during the 80’s and 90’s and we’re still “match fit”!

Do you think because BCO never “broke up” and each member went away perusing projects, it helped you to remain friends?

Good point… We have never thought about it like that, but it’s a valid observation.

In the mid 90’s, we wound it all up and everyone started having families. It’s been the single most grounding experience for everyone. We are more relaxed as people as we aren’t out to conquer the world anymore. We’re just five guys playing a bit of music had having a good time!

Maz, you say how you love the fact that BCO’s songs have been attached to peoples’ memories. (that’s definitely true for myself; I remember singing Onion Skin when I was around ten years-old) Do you guys believe having that connection with people is what it’s all about?

Yes for sure and that ‘connection’ can be on just about any level. I have songs in my ‘favs’ that you would laugh at, but they mean something to me because something happened to me (good or bad) when I was listening to that song!

All great defining artists, connect with people on some level.

Can you still remember the feeling of being on Countdown?

Yes because if there’s ONE thing your parents will brag about, is that their child was on COUNTDOWN!!!

There was also the assumption that if you were on Countdown, you ‘were rich’!! As soon as old mates saw me on Countdown, they would ask “Hey… what car are you driving now?”

Countdown was an important family show. Everyone from kids through to grandparents would sit down together at 6:30pm on a Sunday night and know the Top 10!!

What do you guys see in today’s music culture? Good, bad and the ugly.

Music is ever metamorphosising into the next thing, it has to. Art forms change with culture .. a true sign of the times. The secret is to not follow the trends, but to lead them. Music culture is also somewhat cyclic, so if you’re not current with music culture, you can always wait until it comes around again!!

Today, record companies are an anachronism. Basically, you don’t need one! If you have some money to record, you can make an album. If you’ve got someone in your family with a video camera (or your smartphone), you can upload a video to YouTube. If you’ve got some extra cash left over, you can hire a publicist. {It’s} all of the time knowing YOU own your recordings!!

Talking about the ugly, what has been your worst gig ever?

Way too many to remember … Ironically, as a performer, you know you have them all the time. But by having bad gigs, you get a reference point and therefore when you have a great show, it’s REALLY great!

BCO never have received the legendary status unlike many Aussie acts from your era which surprises me. Why do you think this is?

We tried, we really did… We think in our case, the planets just didn’t line up for us!

What are you eager to experience on this tour?

After this tour, do you think there might be a new studio album from BCO?

Probably not {but} not from lack of interest, but lack of time and effort.

In the 80/90’s we prioritised the band, it meant EVERYTHING to us. We thought about it 24/7. But the shift in priorities came less about the band and more about moving elsewhere emotionally. Making records is a HUGE emotional commitment and we do not have the energy for it.

Thanks Maz for your time! I’m not ashamed to admit I’ve been a massive fan since I was ten!

Thanks Jac… Without people like you, we would be nowhere. It means a LOT, to have meant something to someone!!!