IT’S BEEN A HUGE month for Birds Of Tokyo. Their latest album March Fires debuted at Number One on the Aria Album chart of the week of March 11th. Then their huge hit Lanterns which has been heavily used by various media formats (ie: TV advertisements and series promos) was also featured in America’s new comedy Legit on April 11th in the US. 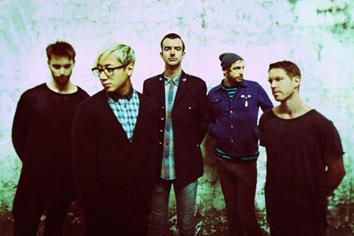 and the drummer Adam Weston) made the move from Perth to Sydney. Before seeking a producer and mixer in LA and recorded there, they spent time together in a French farmhouse fuelling their new material. Birds Of Tokyo is a band who definitely have the foresight of where and what they want to do as musicians.

They’re about to do the Big Pineapple Music Festival April 20th which has an impressive line-up including Grinspoon, Regurgitator, British India, Dallas Frasca and many more. Lucky you Queenslanders! (you can purchase tickets at http://www.bigpineapplemusicfestival.com/)

Thanks to Bianca from Dizzy Media for organising this interview with Adam Weston from Birds Of Tokyo. Enjoy people!

Like so many Aussie bands, you guys had such a great success with your previous albums that have gone under the radar even though you’ve been APRA and Aria winners. Is it nice to be getting noticed by “mainstream media” now?

It’s been cool that Birds have enjoyed quite an organic growth in regards to where we were profile wise upon releasing our debut in 2007 to now having our fourth album out and about. I think it’s important to earn the respect over time of fans and industry alike without mixing bullshit with your musical intentions along the way. We’re really proud of the new record and I guess more presence than ever helps our cause!

With your new music you say “We collaborated a lot more on this music for a lot longer than we’ve ever spent before. We consciously set out to stretch ourselves in every possible direction and hopefully that shows.” How long did you work on your new album March Fires?

Sparki was noodling around with some ideas as early as during the mixing period of our previous record back in mid 2010. If you were to include initial writing sessions right up to post-production of the recording process itself, it would be safe to say two years. Of course during half of that time we were also busy with travelling the self-titled album, so we were really eager to eventually get away from driving each other nuts on tour and instead pulling each other apart in the studio again!

Your new music really has great rhythm and the songwriting compliments the upbeat tempo. Was this a conscious decision?

Just about everything with March Fires was a conscious decision in hindsight, even though every record has its spontaneous creative moments. It’s the first time we’ve felt we stylistically had a cohesive body work. Part of the writing and production process was to have pulsating forward moving rhythms compliment certain song structures and moods. Most rhythmic decisions helped to aid the album’s wide, hazy, textural sentiments.

You write about issues that you’re passionate about. Could you elaborate on what are these?

I personally find that the band is a collaborative vehicle that works hard at creating musical art, not necessarily writing about “issues” that we may be vocal about from one member to another. Of course there are many personal and introspective moments that naturally find their way into subject matter that we spew forth, but collectively at this point in time we are passionate about delivering material that resonates with listeners on a communal level far and wide. Our last two years have been peppered with many ups and downs which led to a shared path of self awareness and the need to tear everything down in order to build it back up effectively again.

You were the talk of Homebake! How did you guys feel afterwards? Have your rave reviews sunk in yet?

Were we?! That was actually our fist major show in over twelve months and I think everyone was just pumped to be back on stage with a new found chemistry. It’s really rewarding to hear our new material connect with punters so early in the piece, whether they may be long time fans or new crew seeing the band live for the first time. We’ve also enjoyed going back and revisiting some of our older songs and sonically pulling them into line with how the March Fires songs are sounding, so Homebake was a great chance to screw around a bit and have some fun.

Talking about Homebake, every group seem to look forward to seeing another act on the bill. What was yours?

Well it was a shame Blondie were on at the same time as us, as were Pond, but timetable clashes are inevitable really. It was pretty special to see Something For Kate kicking it again and on that note Sonic Animation were quite a surprise. Homebake always delivers the goods!