IT SEEMS THE OLDER the musicians/singers are, you can count on getting your money’s worth. Barry Gibb and his talented musicians delivered a near two hour concert last night in Melbourne. 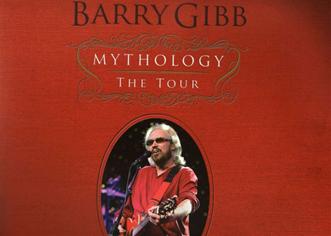 I would say the Mythology tour is a celebration of four brothers achieving worldwide success. Before Barry came onstage, a photo montage and video was showed of the four very young Bee Gees. That captured their love and devotion to each other. The most striking thing that stood out for me is Barry is first and foremost a family man who’s extremely proud of his son Steven and niece Samantha who are now a part of the band. Whenever one took lead vocals Barry stayed onstage in the background admiring their talent. At one stage he jokingly said, “It’s nice to see the music influence in family.”

Barry loved to tell stories about some memories he (and the other brothers Robin, Maurice and Andy) had when the family moved from cold England to sunny Queensland where people had bare feet and the animals were strange. Barry said, “We were glued together ” referring to the four brothers’ bond.

It was very apparent Barry was enjoying being on tour honouring his brothers’ legacies as he said “It’s good to be finally back in Melbourne.”

He said how Spicks And Specks was recorded in a studio behind a butcher in Sydney and how he’s eternity grateful to the producer who discovered them and who allowed them to record in that little studio because that album launched their international career. While performing Spicks And Specks there was a mini documentary being shown on the video screen.

He had a couple of laughs with people who yelled out and the section to the right of the stage seemed to catch his attention, making him laugh a few times. He tried to get the audience synchanised singing the last chorus of Words but it was a dismal failure at Barry’s enjoyment.

He admitted his knees talk to him as they don’t appreciate him standing for most of the two hours, but his vocal range is still out of this world! He’s still the king of falsetto which was demonstrated in You Should Be Dancing.

One very interesting fact Barry shared was how in 1968 Robin wrote I’ve Gotta Get A Message To You about a man on death row with one hour left to live. Stephen sang the first verse with his very rough rock intense voice and Barry sang the second verse. Stephen sang a song that his Uncle Maurice wrote which suited his gritty voice with a heavy guitar sound.

When Maurice’s daughter Samantha (Sammy to Barry) joined the band to sing How Can You Mend A Broken Heart it just showed how some families have music running through their blood. Samantha’s husky voice gave If I Can’t Have You a fresh sound.

One of the most touching moments came when Barry began to sing I Started A Joke but on the video screen behind the band Robin sang the rest of the song with the band. Needless to say, Barry was extremely emotional afterwards. Immortality was another emotionally charged track as Barry said it was written before the “darkness fell”.

Before the encore the audience gave Barry a standing ovation for his humility and raw emotions he had shown throughout the night. However, the night wasn’t complete until he did the undeniable biggest 70’s disco hit Stayin’ Alive. Everyone stood up and boogied!

You Should Be Dancing

How Can You Mend a Broken Heart?

How Deep Is Your Love?

I’ve Gotta Get a Message To You

With the Sun in My Eyes

Every Christian Lion Hearted Man Will Show You

I Started a Joke

Islands in the Stream

If I Can’t Have You

Night Fever/More Than A Woman