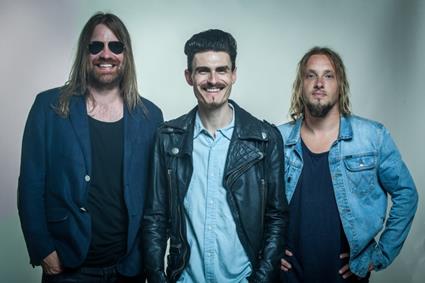 WORDS BY
Jacqui James
THIRSTY MERC GRABBED my ears with Rai singing “I know your name and I got your number…” in their debut single “Wasting Time” from their 2004 self-titled album. (sure I had the hots for a guy at Tafe at the time, so I guess I could relate to Rai’s ramblings)

Then came Thirsty Merc’s mega hits “Someday, Someday”, “Emancipate Myself” and “In the Summertime” all from their very first album, so the guys found a place in my favourite Aussie bands collection, like ten of thousands of fans.

In fact, in May 2015, Australia proved their thirst for the “Thirsties” when the band started a PlegdeMusic campaign to make their latest and rockin’ album “Shifting Gears”. Within 48hrs the lads had reached their goal.

“Shifting Gears” has the Aussie feel to the tracks. It’s like sitting down with an old mate discussing what’s happened in your lives during your hiatus. The first track “Understanding Love” has a feeling like you’re driving taking in the sun and the beautiful scenery passing by while your mate is talking about love and being in a band.

After the tragedy which sadly killed their stage manager Shane Cooper and seriously injured Mick (drummer), Rai, Phil (guitar) and Phil (bass) decided the show must go on. Since October Thirsty Merc have been touring this big beautiful county, receiving rave reviews. To see their remaining dates, scroll down!

It has been a dream to interview Rai Thistlethwayte as he is one of the most talented wordsmiths of our generation. So thankyou very much Rai and Rina from Ferris Davies PRM.


Immediately when I listened to Shifting Gears, I thought “welcome back Thirsties!”. Your music has always been so homely and likable. When you got back together was making these eleven fabulous tunes as easy as before?

It was extra fresh getting back in the studio, ‘cos we’d had a pretty healthy amount of time to get the inspiration flowing, had enjoyed a bit of time off the road previous to the recording process, and we wanted to return to our rock roots, hence recording in Melbourne where we did our debut album. It felt really good, the right thing to do at the right time. Making an album is never super ‘easy,’ but this one was a really positive experience. We’re glad it came out as well as it did!

Congrats on debuting at Number 19 on the ARIA Album Chart and Number 4 on the Independent Music charts when “Shifting Gears”was released last year. Were you pleasantly surprised by the love Thirsty Merc received?

We were definitely pleasantly surprised. We’ve always tried to make great music with clarity, strong melodies etc, etc, with a realness to it, but as this was the first full length record of new material since our very early days which was 100% independently released, we didn’t know how it would go on things like charts etc. It’s been great to know that you can make music without the major labels’ systems and still get a great, comprehensive release going.

Your music is still fun! The track “That’s Right Shoogie” captures the energy and fun of your debut single “Wasting Time”, but then you make a melancholy song like “Every Time and Then” which is beautiful. Your range of emotions is always perfect. As a songwriter is this important? 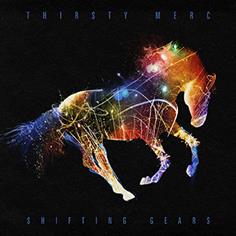 This is a great question, and thank you for the kind words. I think on any album that has any length to it, you’re looking for some sort of light and shade. You couldn’t simply have twelve ballads, or twelve up tempo things. So it’s all about finding a compelling program of material that fits together. I think albums often are a bit of a compendium of songs that reflect human emotions, and humans feel all those things: elation, sadness, introspection, celebration, yearning, storytelling, all these elements to the songs are in there, and it’s nice to have a long form release like an album to explore and document where we were as writers at the time.

What made you guys reform? Were you surprised your fans raised the money to record “Shifting Gears” in 48hrs?

Technically, we didn’t really reform, because we didn’t ever break up. We simply took some time out, then} I did some traveling etc, the other guys worked on a few other projects. We were definitely surprised to see the fans getting that involved in the crowd funding campaign. It was really amazing, and we felt very fortunate to have those fans, and also that they were such an integral part in the recording moving ahead to such a great level.

It’s awesome you guys gave some of the donations to Westmead Children’s Hospital’s Bandaged Bear Appeal. What made you choose this foundation?

I was born in that particular hospital. Also Matt was in a relationship with a girl who has a daughter who has brittle bones disease, she spent many months in and out of hospitals having some pretty excruciating operations. We thought it was a very worthy place to donate.

What is your favourite track on “Shifting Gears”?

I couldn’t really say. I do like” Touch And Go”, I like “The Grind”, I like “Understanding Love” and “Sweet Talker” is great fun to play live!

Are you enjoying being on the road again?

We really are. It’s the best way to enjoy music: LIVE! We grew up as music fans, listening to other artists’ music and going out to gigs. So it’s only natural that we love playing live so much.

Thanks Rai, Phil and Matt for making such a great album. I hope we get heaps more of albums from you guys!

BACK TO THE GRIND TOUR

Sunday, 8 May 2016
The Triffid, Brisbane, QLD
Tickets available from Oztix

Friday, 20 May 2016
Marlin Hotel, Ulladulla, NSW
Tickets available from Oztix and the venue