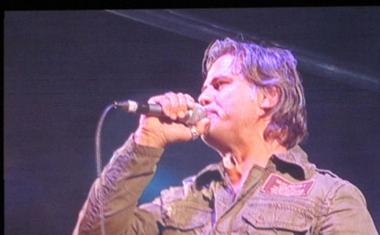 Unfortunately we missed the Choirboys but seeing them live last year I bet they would have warmed up the crowd quite nicely for an afternoon of AUSSIE ROCK on a chilly afternoon!

The afternoon wasn’t without its drama. The keyboardist of Mi-Sex Murray Burns collapsed going into the third song and the band were forced to end their set so as Murary could be carried off the stage to attended to by paramedics.

The show must go on as they say. Mick Newton, Roundhouse Entertainment Promoter reassured the crowd that there would be more music from 1927, Ian Moss and Noiseworks!

When 1927 got stuck into their set all their songs came rushing back to me (like Compulsory Hero)! When they released their debut album Ish in the late 80’s, they became one of the biggest bands in Australia! Today in 2012 they still have fans who remember each

line to every song. If I Could, You’ll Never Know and their biggest hit single That’s When I Think Of You were when the crowd became boisterous.

Dragon were the surprise package of the whole afternoon/night. Lead singer Mark Williams engaged the crowd from the word go. Mark’s positive and cheeky side was very visible as he had a few jokes with their energized audience. He asked, “Are you all pissed?” and introduced Todd Hunter as the “latest member of the band.” They sung all their hits including Young Years, Celebration, O Zambezi, Still In Love, Are You Old Enough? and April Sun In Cuba which brought everyone to their feet.

Whenever Ian Moss enters the stage, there’s a high respect that washes over the crowd. It’s almost like we’re preparing ourselves to be in awe. The funniest thing happened though; as a typical Ocka, the first words that came out of Ian’s mouth was, “How the fuck are ya?”, then took the piss of other wineries’ reds. Ian with his bassist and drummer did songs off his latest album Soul On West 53rd, plus treating us with his two big solo hits Telephone Booth and Tucker’s Daughter. But the crowd really raised their voices to Choirgirl, Bow River and My Baby.

Noiseworks originally formed in 1986 and for three years they dominated the radio and Aussie rock scene. I was a very big fan of this band and remember singing to their music. On Saturday night their first track Take Me Back was very fitting. Jon soon said how it’s “Great to be back” and he was at ease being back in the band, even when things technically didn’t go to plan. He explained how when things don’t go to plan he loves it because that’s life! He jokingly said, “Loves when everything fuck up” then he thanked us supporting live music.

These days Jon isn’t afraid to be outspoken! He dedicated No Lies and Voice Of Reason to our politicians and urged us to appreciate each other because “Life too damn short.”

Before singing In My Youth he joked about how as a young Dad his children would climb over him on the couch where he’d slept after drinking and doing other stuff. He had trouble hitting the high notes the song is known for so he urged the crowd to help in singing with him!

There’s no doubt Jon’s outlook on life has changed since his heart surgery. Having the privilege of meeting and interviewing him, he is a man who’s priorities and care for others shines. Before singing Touch he urged people to reach back and touch somebody.

As the encore Noiseworks brought on Mick Newton to sing the Sunnyboys classic I’m Alone With You. The crowd went wild as Noiseworks performed the the last song of the night Hot Chilli Woman.

It was an afternoon filled with a little drama but it shows how we love our Aussie Rock!

The Script Show Us Heart