Jacqui James 1 Comment on Angus’ Style Of Simplicity Towards Music

ANGUS STONE IS ONE OF those singers/songwriters who has music in his blood! He’s not doing it to gain fame and fortune; hence putting his latest album Broken Brights in its entirety on his site for people to listen to. 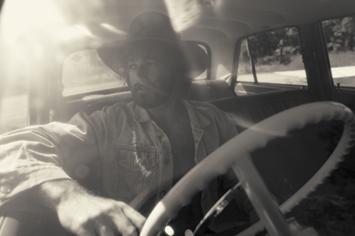 This morning the nominations for this year’s ARIA Awards were announced and Angus can be found in two categories; Best Male Artist and Best Blues & Roots Album for Broken Brights. Also adding to his success as a solo artist, Angus has travelled the globe getting praise from Mojo UK and Rolling Stone.

Recording Broken Brights all over the world from the Swiss Alps to the Australian coastline, Angus loved capturing his images and memories from his past including his Aria award-winning duo with his sister Julia Stone.

If you take a listen to Broken Brights you will hear how simplicity is underrated. The single Wooden Chair is the perfect example of a song doesn’t need bells and whistles (although there’s whistling in it!)

I was fortunate to interview Angus! Thanks to Angus for his time and thanks to Felicity for organising it!

FYI: Below our interview are his Broken Brights national tour dates.

You music is very folky/country. Where did you get this interest from?

From the folks in the country! Nah just kidding… I live out on a farm now and there’s lots of space and it’s nice to live of the land and grow vegetables and have chooks, bees and cattle. Maybe that’s where it came from.

In River Love I hear from Irish/Scottish sounds. Do you have one of these in your heritage?

I have Scottish blood in me… but the name Angus, my dad told me the other day, they didn’t know what to call me so they named me after Angus Young ‘cos ACDC were his favorite band at the time

Your current album Broken Brights has been released in Australia, UK/Europe, North America and soon France. As a singer/songwriter, you must be very proud of “your baby” being out there?

It’s a real trip seeing how well it’s been received both at home and internationally. It’s taken me by surprise and has been a very humbling experience… For something I’m so close to, it’s just really cool that it’s taken on a life of its own and people can have their own experiences with the writings.

Will you be touring these countries in 2013?

Yeah we are on the road at the moment in the US. {I’m} heading to Europe next through Germany, Switzerland, Holland, London and then back to Australia for a bunch of shows and festivals. I think the plan is to tour this record for a while… We are heading back to the States for another extended tour in 2013. I’m really proud of this record and just want to keep playing it live.

Do you miss your sister Julia Stone onstage or do you like standing on your two feet?

Not really – she was annoying… nah just kidding. I miss being up on stage with her and hearing her new songs. I very much felt a part of the audience and I could kick back and have a drink and enjoy the show… but it’s great to have the freedom to do my own thing. It’s just a thing of change and the time for it.

The relationship you can have with the audience. The energy that flows and it’s a real trip seeing people singing your songs and connecting with them.

I love Wooden Chair for its simplicity. Actually all your music isn’t over-produced. Is this a conscious decision?

Yeah for me the songs I write them, record them and it comes down to it being as simple as that. Maybe that’s where it comes from I don’t know.

How was it going to your old high school to play in July?

It was great it was a really humbling experience to see all the people I grew up with there and it was my first ever show on my own and it couldn’t of been more fitting because there was a lot of love and it was one of those things that just felt right.

What piece of advice would you give to indie artists who are struggling to get their music heard?

Hang in there. If it’s for the right reasons know in your heart that the music will always be there for you no matter what happens.