Up Close And Personal

LAST NIGHT WAS AN which I will never forget, but I’ll get to why later! 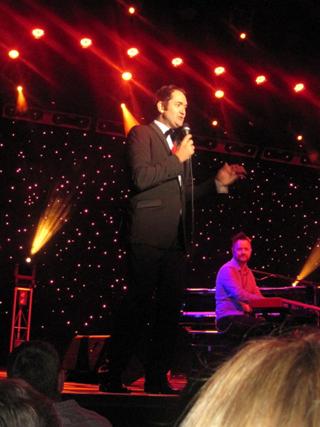 Darren Percival is one of those rare singer/songwriters who radiates joy to everyone in the same room as himself and I’m betting it’s safe to say everyone who came out of The Palms last night was feeling very uplifted.

Darren definitely is a natural-born crooner; last night for the first set he was dressed in a black tuxedo, white shirt and a black bow tie, this matched with his soulful voice.  It felt like you were sitting in a bar watching a classic performer who has been around for several decades. When he and his great band performed the Ray Charles’ classic Georgia, the spotlight shone on Darren and his pianist for the majority of the song transporting the crowd to a blues club.

Although Darren was the runner-up on Australia’s 2012 The Voice, he’s definitely grabbed his chance and is receiving the acclaim he definitely deserves. He proudly belted out I Believe as he said singing it on The Voice changed his life.

Don’t make the assumption Darren doesn’t know how to work a crowd! He said “Thank you very much you look delicious” and has the perfect sense of humour, loving to get the crowd involved. In the middle of singing Shower The People, he urged the husbands who were ‘dragged along’ to sing and actually picked out one lucky gentleman in the front row and handed the mic over. The guy in question a great voice and did the song justice! 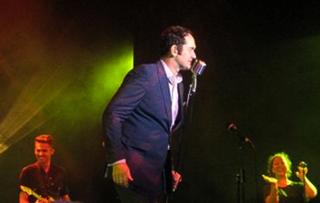 He is extremely thankful for what The Voice has done, but revealed last night it was really one of his backing singers on this tour who dug him out of a rut in 2006. Mahalia (Jimmy Barnes daughter) while on the phone invited him to a gig, unbeknown to him her Dad, Mossy and other great Aussie talent’s were at the show right there in the front row. He felt very intimated, but said that night changed his life and now he sincerely considers Mahalia as his best friend. This was evident last night as they were joking, laughing and very at ease in each other’s company. The other backing singer Jade MacRae took centre stage with Mahalia and sang Higher  Darren had no problem saying, “I’m a lucky guy!”

Darren is thrilled with having been able to make the album he’s always wanted to make and that is A Tribute To Ray Charles. Last night he did Hallelujah, I Love Her So, Georgia On My Mind, Hit the Road Jack, Drown in My Own Tears (Darren’s favourite Ray Charles’ song) and Unchain My Heart.

Live Darren’s smooth soulful voice is just a pleasure to listen to, but in the second set he revealed he has a hidden talent that everyone was in awe of. The guy is an awesome beatboxer! He used a recording device onstage to record sounds with his mouth and choruses for two songs Blackbird (A Beatles’ cover) and an original called That’s What Donnie Said. Like we all know technology sometimes doesn’t do what we always want it to, but Darren found the funny side and cracked up laughing before blowing us away with what he produced, giving me goosebumps.

His wife and brother (who is Darren’s photographer) were there last night so Darren told us stories about where original songs have come from; inspired by family events. Damage Done he wrote after his 40th birthday party where his wife had made a photo collage of his life so far.

The band busted out a gospel ending to Jealous Guy when his admiration for his band beamed. Then he and Mahalia sang his “favourite moment from The Voice” Without You.

Darren has written a new song Danced All Night to thank everyone and when he had finished singing he said he “had a really great time (tonight)”.

Hallelujah, I Love Her So saw Darren come out to the crowd and circle the room. He spotted myself sitting next to my family…and…well I was the lucky woman who was serenaded by this sweet man for a good three – four minutes! Yep, I’m still smiling and my sister is very jealous! 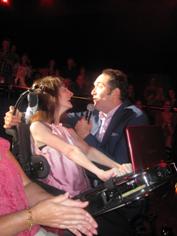 The concert was meant to end at 9:30, but actually ended at 10:50pm with a song called The One I Love written for his children. Darren played his two year-old’s ukulele. Again he went out into the crowd and when finished went out into the foyer to meet his fans for photo’s, autographs and questions, again confirming how much he appreciates the people who come to see his shows.