ADAM KOWALCZYK is an extremely talented singer/songwriter, all-round nice guy and the younger brother of Ed Kowalczyk, the former frontman of the band LIVE! 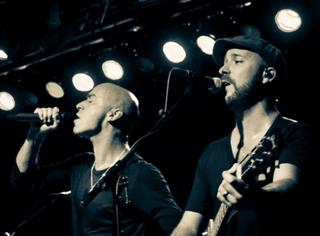 Adam is a passionate musician in his own right and has had his own band Adam and The Weight for almost ten years as well as often playing as a solo artist. Now he’s the guitarist for Ed’s solo work and tour and still gets humble by audience’s reactions.

On his Myspace page you can hear his own music which definitely is worth a listen (All Night) which is definitely worth a listen . He writes what he’s passionate about, but also about those less tactful. Like his brother Adam has this beautiful, uncanny falsetto.

I must say, when I received Adam’s answers to my interview questions, I was blown away! He gave answers such thought and didn’t hold back! So here’s our interview. Enjoy!

Last week you told me you’ve just gotten off a twenty-three hour flight! How do you do it? You must be devoted to the fans?

Allow me to clarify. I began touring with LIVE in 1999 beginning with The Distance to Here. So, roughly ten years with him in that regard but in totality we are at eleven years and counting. That being said, I can only count with a few fingers where we have had our moments on tour but those usually stemmed from having the bond of being brothers or just being on the road too long. That bond, as I’m sure many can attest to, does not go away just because you are in a rock band together. {smiles} Actually, it intensifies. With LIVE, in an essence, I had four bosses and one of them was my brother who happened to be the lead singer so it added that extra level of sincerity in the work. It was difficult at times but eleven years must say something. {smiles}

You and your brother Ed must be pretty tight to be in the same band and tour together for over 20 years. Do you ever get sick of each other?

The “end” of LIVE, to my understanding, was initially meant to be a hiatus in an effort to build excitement for a return. More importantly, it was to branch out and try new things. In my own solo endeavors, I have had the opportunity to play and write with different musicians for years. It broadens your sense of style, unleashes a plethora of different interpretations of your work through the eyes and ears of new talent. This was a chance for Ed to do so on his own and I was nothing less than proud of him to take that step. I think he did very well I might add. {smiles}

Listening to Come Undone I hear that you have an uncanny falsetto like
your brother! Do you know where it comes from?

Thanks for taking a moment to visit Myspace and listen to my material! And thank you for the compliment! I believe our vocal style and voice comes from our mother. She has a beautiful voice. It wouldn’t be fair if I didn’t admit that I also feel our abilities come from above and are a gift from God.

Listening to your songs on Myspace I hear that the songwriting talent is in your family because your lyrics contain meaning but they are sometimes sexy. From what age did you start to think “I can write songs”?

From the moment I was able to strum a few chords and sing at the same time, I began writing songs. (twelve years-old) I was never really interested in learning all the scales and being able to dig into to solos and the like. More so I was drawn to being able to convey a feeling through melodies and lyrics.

On your Facebook page you have some videos of your solo performances. They’re brilliant! You’re an awesome singer/songwriter who captures the audience’s attention. Do you feel at ease when you become the frontman or do you prefer being the backing vocals and guitarist?

I feel much more comfortable being the frontman because I am in control of the emotion. I have the challenge of dictating the mood in the room. If I didn’t feel so strongly for my brother’s work, I doubt I would be in the background for very long.

Your track All Night is very interesting! {laughs} Was from a personal experience?

“All Night” was written quite a few years ago so I’m going to go out on a limb and say it was most likely out of experience due to my lifestyle at the time. I have a wild side that has since been tamed….at least I think so. {smiles}”

Can you tell me a bit about your band Adam and The Weight? Where do you do gigs? Is there a possibility of an album from you guys in the future?

Adam & The Weight was originally formed in Los Angeles in late of 2001 during a break in my touring obligations with LIVE. I had met a drummer named Brentt Arcement through Dennis Rodman during one of our many wild outings together. I went to see him perform at a show in Newport Beach and was blown away. After sharing a few of my songs with him and believing that his intentions were pure and he was a fan of my work, we found a guitarist and bass player to join us. With the help of an investor, we recorded “Looking Up from the Ground” at The Record Plant in Los Angeles. After about two years, a few shows in the Los Angeles area that included opening for LIVE and a tour opening up for OURS across the US, the guitarist had to leave the band due to a family emergency. The timing of his departure was difficult and I was stretched in so many ways that the pressure of working for LIVE and trying to lead a band was not worth it. I had serviced the record to four or five different major labels and they all declined. That made me believe that the timing wasn’t right and I should move on. Regardless of the disbanding or the original line-up, I continue to use the name Adam & The Weight during my full band performances. Currently, I have been writing here at home and plan to do a full record in 2011.

How was it coming back to Australia on Ed’s Alive Tour and seeing such a positive reaction from fans? I remember when Ed introduced you as a part of his band everyone went nuts! That must have felt great eh?

Coming back to Australia with Ed for his ‘Alive’ tour was amazing. We have been down under three or four times before with LIVE but this seemed to carry along with it a sense of urgency unlike any other. The reaction of the crowds meant so much more this time around. To be welcomed with such a reaction from the fans after his introduction was beautiful and really speaks to the changes Ed has gone through as an artist and as a man.

What do you think is going to be in the future for you?

It’s hard to say what the future holds but for the time being, I’m just honored to have an occupation that can bring so much joy to people around the world and in turn provide for my family. It really is a win-win regardless of the ups and downs. I pray that I can continue to do so for years to come and I pray that when I bring my solo work to Australia, I can hear those same cheers again! {smiles}

A MASSIVE HUGE thankyou to Adam

I wish to thank Nick Sacco for suggesting to contact Adam in the first place; thankyou for believing in me.