ALICE FRASER IS not just an award-winning comedian who used her academic background as a corporate lawyer in her comedy routines and Tea With Alice podcast, she’s a banjo player too! 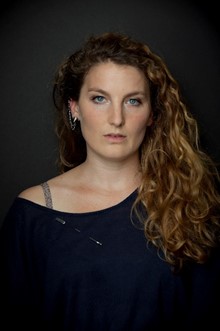 Currently Alice is performing her Chronos show at the fabulous Adelaide Fringe Festival until March 5th, then she’s taking the show to Melbourne’s International Comedy Festival then to Sydney and Perth.

Before Christmas I was extremely fortunate to have a chat with Alice about life, comedy and Julian Assange.

G’day Alice! Thanks so very much for giving your time up for this interview, especially upon performing at The Fringe Festival, The International Melbourne Comedy Festival, Sydney and Perth Comedy Festivals, while caring for your little baby!

Reading the first paragraph of your very impressive bio, I thought “Damn, hail to Alice!” You’ve done academia, you were a corporate lawyer, now you’re a comedian, writer, poet and most impressingly you can play a banjo! And you’re a kick-arse comedian and a new mum! Are you one of those lucky people who never runs out of energy?

I’m afraid not! I’m one of those people who never feels like they’ve done enough, which is not quite the same. Unlimited energy would be a much less stressful way towards achievement. I put it partly down to having a very energetic Holocaust survivor paternal grandmother on one side and my mother who was sick with MS and had to fight to get anything done on the other. It’s more complicated than that, of course, but I just never felt like I could take having time for granted.

You had your first gig back on December 9 since having your little girl. What was that like?

Getting back on stage six weeks after turning part of your body inside out to extrude another human? It felt extremely weird! Surreal and vulnerable and underprepared, emotionally, and physically quite wobbly. I have never really talked about my body on stage, or discussed graphic physical things, but there were a few things about giving birth that I thought were really interesting and weird, and I’d never heard anyone discuss before. So, body-stuff isn’t my wheelhouse on stage, but talking about things other people don’t talk about is my wheelhouse. Which was a dilemma, {but} luckily I had a very warm and lovely crowd of people. I hadn’t really had time to advertise it much (because I had this whole baby thing), so really, itself selected for true believers; people already invested in my work. My sister-in-law said “don’t talk about birth or postpartum, because you will have no perspective or judgment on what’s funny and what’s too much for the audience.” She suggested I run my jokes past someone who doesn’t care about you as a person, and I absolutely didn’t have time to run a preview gig. So I’m lucky that the people who came seemed to care about me as a person, because otherwise I might have a lot of l complaints on my hands.

To a completely different subject to comedy, you debated the force of the media in Julian Assange’s case. What prompted you to do so?

Oh this wasn’t a big thing at the time – I was doing a ten minute comedy spot at Splendour In The Grass in exchange for a ticket to the festival. (In a lot of a comedy career, it’s amazing how many gigs are in exchange for something nice that isn’t money). Anyway, Dan Ilic (of A Rational Fear) asked if I’d like to do the comedy debate as well, which sounded like fun, so I headed backstage and was assigned to the affirmative team to debate the question “can we trust the media”. So I wrote this slippery little bit about how trust is about expectations and you can trust the media to do exactly what the media does, even if that’s not always what you’d want them to do.

Julian Assange was skyping in (this was before the Pandemic brought us all to Zoom) for the negative. It was a bit of a stitch up, really, I thought, but Assange wasn’t wildly interested in the debate. He was launching the WikiLeaks party in Australia and mostly used his time to pitch that. And then his team won anyway, because of course it did! It’s Julian Assange talking about how you can’t trust the media or the government! I was pretty funny in my bit though. And then we finished this angry blonde kid came and threw a water bottle at the stage and howled at me for being a media shill, which was I guess an early example of cancel culture, or something.

In your Ted Talks and comedy routines, you speak/sing of how the media and some men portraits female bodies. Here’s a snippet of one of your songs for readers:

In your opinion, are these things getting better or worse (or in between)?

I think it depends on who you talk to, but legally speaking we’re a lot better off than we were a couple of hundred years ago. On the other hand, if someone’s a creep, we can’t just get our nearest male relative to challenge them to a duel anymore, so progress is a mixed blessing. I don’t think people get away with low grade public disrespect as much any more.

What would be the one thing you would advise men’s attitudes on?

I think my advice to any group of people it’s always going to be the same sort of wishy-washy thing of basically, see other people as people.

Your podcast Tea With Alice covers subjects that some people find difficult to discuss. Which have been the top topics people have responded to the most?

I have a fantastic base of supporters on Patreon and We do These weekly salons we where we talk about everything including what came up in tea with Alice. It makes me feel much more accountable than I think many Podcasters do, where the only critiques they get are either shallow approval or unparseable pile-ons on Twitter. I get to have reasoned conversations with people of many different opinions. It’s a real privilege

You’re doing CHRONOS at the Adelaide Fringe Festival. You must be eager to get out there again?

Truly thrilled and excited. {I’m} worried about having to wear real clothes again.

Thanks very much Alice for being one of the most impressive persons I’ve chatted to!

For all Alice’s tour information, head to More Talent’s site.