TALENT TELEVISION shows often get a bad rap as some believe they’re machines producing manufactured artists. But many contestants (often not the actual winners) get discovered by having a platform to take a leap from. 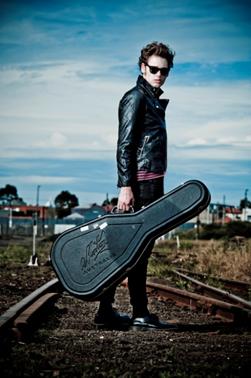 Adam Martin is a born singer/songwriter. At eight he decided to be an actor but then at eighteen he discovered the Beatles at eighteen never looked back. Adam always wrote poems but then when he learnt five chords he could turn his poetry into songs. Soon he found himself doing gigs around Melbourne.

To his credit Adam was hesitant about going on The Voice Australia 2012 with the fear of losing his “artistic identity” which is something to give him credit for. But when he auditioned he realised it was in fact an opportunity of a lifetime.

Adam turned out to become one of the favourite contestants of the Voice and on April 8th he released his debut single In My Dreams which was a collaboration with Evermore’s lead vocalist Jon Hume. The catchy pop tune was the most played track added to Aussie radio after its release and the other night I saw it in the Top 20 of Foxtel music station Max.

Below is the great video for In My Dreams:

I feel so fortunate to have interviewed Adam who is a lovely young down-to-earth man. (A big thankyou to Marc from AAA Entertainment for making the interview possible!) Be sure to check out his tour dates under our interview.

Congratulations Adam on your new single In My Dreams which was the most played song added to Aussie radio after its release. I bet you’re pinching yourself being signed to Universal Music as well as having among released after being a contestant on The Voice?

Thank you. Yes the track has been doing great so stoked! {Laughs} Well yeah… I`ve been working on my music for a few years now and I’ve had my share of hard times. So to be in this position is amazing!

Speaking of your time on The Voice, I love this quote of yours, “What appealed to me about Keith was that I was brought up with his music. He was a singer/songwriter who played acoustic guitar. He’s really down to earth and a great storyteller.” I love the fact you went on the show with the intention of continuing being a songwriter! Do you think The Voice was a building block to get discovered by Australia to pursue your singer/songwriter dreams?

Definitely! I have been working on my music for a few years now and I had been doing fairly well. Playing the local pub scene, touring with my EP and working on my YouTube channel. It was obvious though that one of the biggest challenges you face in a music career is being heard. So when I saw The Voice, I saw the opportunity of a lifetime. Be heard by the nation! I didn’t know how it was going to turn out or what the show would even be like. I just decided that if I entered and did everything I could to show who I was an artist. Then hopefully I could be heard.

Keith is an incredible musician. Both in his own genre and in every other genre you can think of. He has a seemingly infinite amount of knowledge and experience when it comes to music and a career in music. So to sit there and be able to learn from him was just amazing.

At first you were against going on The Voice, but with family encouragement you changed your mind?

You hear all the ‘horror stories’ of reality TV and I was worried I might end up in one of them. There were a few factors I had considered. One was that Universal were the ones partnered with the show. This was a big point of difference for me, as a lot of my favourite artists are signed with Universal and they are a great label. My family also gave me the encouragement I needed to take the chance….Which I’m glad they did. {smiles} Because fortunately entering The Voice was one of the most life changing and positive experiences I could ever have.

I’m also impressed with the fact you love the Beatles and you write poems (because I did exactly the something when I was around your age)! Are you a Lennon or McCartney fan?

{laughs} That’s a really tough question! I really think they are at their best together…There’s just a magic that happens. But I would have to go with Lennon as he was the first who inspired my love of guitar. {Jacqui: Great answer Adam!}

Do your most of your poems turn into songs?

Sometimes…I tend to write lyrics in a different way to how I write poems. Different mindset. Poems can be more internal or abstract and use more evocative language I suppose. Whereas in music, although it can still be all those things. It’s usually more straight forward.

How did you meet Evermore’s Jon Hume to produce In My Dreams?

After Signing to Universal I began working on my originals. I’ve always had a love for big sounding spacious recordings including The Verve Coldplay, The Frey and I really felt that was the direction I wanted to go in with my new tracks. Obviously no-one knows more about that epic soundscape production than Evermore’s Jon Hume. So we got in contact and it just snowballed from there.

In My Dreams is a very catchy pop tune! How did the lyrics come together?

In My Dreams is about love and loss… Regretting past mistakes and wishing you could change them.

At the moment you’re busy touring the countryside. Is this surreal because this time a few years ago no-one had heard of you?

It is surreal and amazing and incredible…There aren’t enough adjectives to describe what it means to me to be where I am today as opposed to even one year ago. All I know is that I’m incredibly grateful to be here. {smiles}

Are you planning to release an album of original material?

I have been writing and working on a lot of tracks. Hope to have something out soon. {winks}

Thank you very much Adam for your time! Good luck with your tour!

You can catch one of Adam’s gigs below: