ORIGINALLY A SYDNEY NATIVE, Ray Mann has definitely had some amazing experiences since moving to Berlin in 2011. He has performed with Al Green and Tori Amos, but not after bouncing back from his original band breaking up, management and issues in his personal life all came to a head in early 2011.

As a true Aussie, Ray dusted himself off and decided to relocate to Berlin. From his bedroom he launched The Sketches Project where he invited fans to put their input in his music and videos. The result is Sketches which is available www.ray-mann.com/ and through MGM. If you think of the smooth tones of Ben Harper and a collective genres of funk, reggae and rock.

In November and December he’s coming home to tour! 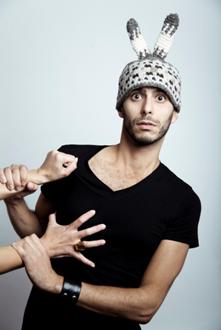 A big thankyou to Ray who answered these questions on a PLANE! Also thankyou to the guys from Heapsaflash for allowing me to interview Ray!

You’ve come back after everything fell apart – management, band and things in your personal life, but then you moved to Berlin in 2011 and after that you found yourself sharing the stage with Al Green, Tori Amos and Lauren Hill! Do you think Australia doesn’t treat real talented singers/songwriters so they move overseas?

My tours with Al Green and Tori Amos were amazing – those happened in Australia before I moved to Berlin. The festival dates with Lauryn Hill and Aloe Blacc happened here in Europe earlier this year. I think Australia treats some artists better than others, but I don’t think that’s unique to Australia. In Berlin, I’ve met artists from all over who feel like they don’t fit in back home. And some of us move overseas just to see what living and making art in another part of the world is like.

Your tracks are like sulk! They’re easy to listen to. Are you a laid-back person?

Thankya! I think my music is much more laid back and understated than I am.

Your second album Sketches has so many genres from blues, hip-hop to garage rock! Growing up were you into all types of music?

Sketches definitely has a mix of styles. Each song was created as its own experiment during the 12-month Sketches Project, and audience input informed the songs as much as my own taste in different kinds of music. I think the songs overall are still rooted in soul, and each one jumps off in its own direction. It’s been fun to open things up a bit and just see what comes out.

Are you looking forward to coming back and touring Australia this month and December?

For sure – I’m looking forward to playing shows with my Aussie band and Aussie audiences that I’ve missed so much. Plus I get to escape Berlin winter for a bit of sun too – bonus.

I’d imagine at your live gigs it would be a lot of fun! Is it like one big jamming session?

We have a lot of fun at our live shows. Jamming is one big part; projections of my visuals are another. My favourite moment at anyone’s live show is when you realise something unrehearsed is happening; that you had to be there on that night to see it; that it didn’t happen at the last show, and won’t happen at the next. We like to be spontaneous on stage, and keep each other on our toes – and the audience is in on it, sharing those moments with us.

All the best, Jacqui.

Feel free to check out Ray on: