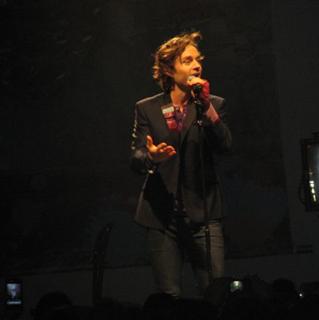 LAST NIGHT AFTER HIS SOLD-OUT concert which begun The Secret Tour, Darren twitted “Melbourne. OMG. What an amazing welcome!! Thank you xxxxxxx.”

Darren’s bandmates came onstage one by one until the star of the night walked out under a glowing umbrella. From his latest album Secret Codes And Battleships he sang Taken By The Sea quickly followed by his huge first single from the album Talk Talk Talk Talk.

Unlike previous Hayes’ concerts, there was a broader range of ages; maybe because they have grown up with Darren sharing each other’s happiest and lowest times. Last night when Darren performed Superstars And Cannonballs for the first time in twelve years he revealed that the few years following the single were “fucking awful” but thanked his fans for sticking by him.

My impression of Darren’s state-of-mind is that he has found peace within himself and with his past. Last night whenever he sang a Savage Garden song you could see how proud he was. To The Moon And Back got a huge sing along and response. Darren said, “We couldn’t hoped for a warmer welcome.”

Darren’s falsetto is one of the best in the world, but last night I was transfixed. When he did Insatiable and his latest single Bloodstained Heart everybody was capturised by the range in his voice, but snapped us out of being mesermised to sing the “Ohhhhhh” in Bloodstained Heart. 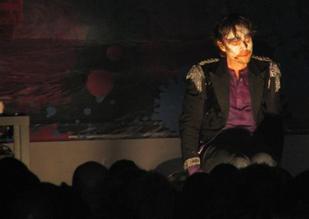 Darren said while making Secret Codes And Battleships he wrote album when he was ‘loved up’ when other relationships around him were busting up.

The version of Savage Garden’s Break Me, Shake Me had the beat of MJ’s Billie Jean, which everyone loved. Then a transparent Japanese screen was brought out onto the stage which Darren got behind and applied white facial make-up to himself. He took the stage and sang a We Are Smug cover Hot Tub Blues, while straddling a cabaret-style chair. I Don’t Know You Anymore saw Darren sitting in a phone booth and you could hear a penny drop.

Affirmation, Crush (1980 Me) and Truly Madly Deeply were giant sing-alongs when Darren encouraged his fans to sing. He left the stage saying “Thank you so much….. God bless.”

Taken By The Sea

To The Moon And Back

Black Out The Sun

Hot Tub Blues (We Are Smug)

I Don’t Know You Anymore