LIKE MANY TRUE artists Katie Noonan has involved herself in many side projects showcasing how her heavenly voice can suit any style of song whether it be pop, jazz, rock or classical. She has won four Arias and six times platinum album sales in her bag. 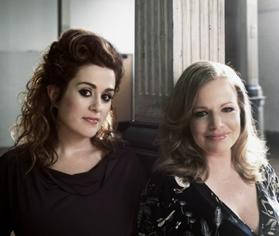 Katie met Karin Schaupp (a very successful guitarist) at a festival seven years ago and their friendship bloomed. In August they released their album Songs Of The Southern Skies, which is an unique collaboration of classic and iconic Australian and New Zealand classics. This includes Into My Arms (Nick Cave), Man Of Colors (Icehouse) which features Iva Davies and Diana Doherty), Baywarra
(featuring Gurrumul and Chris Cheney) and Bless This House.

With Karin’s new baby in tow, Katie and Karin are currently in the middle of a national tour. The dates are below my interview with Katie who was delightful. Thankyou to Amouk for making it possible.


Congratulations with your Aria nomination for your collaboration with Karin Schaupp on your latest album Songs Of The Southern Skies which is a collection of Aussie and New Zealand legendary tracks but with a whole different sound to them! What was your inspiration to do such an album?

Thank you! Karin and I are fiercely proud Australian musicians and we really wanted to celebrate the incredibly rich tapestry of music we make here and in NZ in a new way.

Were you hesitant to totally change each of the songs’ arrangements?

Not at all! A sign of a good song is if you can pull it apart and put it back together in a new way and I think all of these wonderful songs did that so well!

What is your favourite track on the album?

Well to hear the beautiful Clare Bowditch sing my song Emperor’s Box was a particularly special highlight for me. She is a gorgeous woman and the sentiment of that song is something we have shared so to share that in voice together was very special.

Heart’s A Mess highlights your heavenly voice with Karin’s soft Spanish sounding guitar. Was it a natural fit with your collaboration with Karin?

I loved the melody of that song so much when I first heard it and I think the ethereal nature of the chorus motif works well with the two of us in this new intimate setting.

Where were Songs Of The Southern Skies recorded in Brissy?

At a small studio in Enoggera called Hope Studios – engineered by the lovely David Neil.

How did you choose the songs to be included on Songs Of The Southern Skies?

Pretty simply – songs we loved that we had a personal connection with and that we felt would work in this intimate setting. I also wanted to make sure we reflected a wide range of styles (pop, jazz folk, classical) and a good mix of male and female composers/songwriters.

On Songs Of The Southern Skies you were privileged to work with amazing artists like Iva Davies, Gurrumul, the lovely Claire Bowditch and the rocker Chris Cheney from The Living End. How did you manage to convince such diverse acts to be involved?

Well I came up with a wish list in my head and thankfully they all said yes – we were humbled to say the least! I guess the diversity of our guests reflects the wonderful diversity of our music scene.

Are you enjoying your national tour (especially with Karin’s new baby in tow)?

Loving it! I am loving touring with a baby again and loving playing to beautiful audiences around the country. We have been particularly thrilled to have local children’s choirs join us for heart’s a mess so that has been extra special!

At your gigs, do you have special guests like Claire Bowditch and Chris Cheney?

Our main special guests have been the gorgeous children’s school choirs! But I am very excited to say that my brother Tyone Noonan (from our band George) will be joining us in Brisbane and Sydney! Also in Sydney we will have the beautiful Polynesian dancer Ngaire Ti-Ani Kelly.

You’re always in different projects and always on the go! Do you ever take a break and if so what’s your perfect holiday?

Perfect holiday – remote beach with my beautiful boys. We just had a holiday in Fiji before this tour which was amazing! {winks}

You can catch Katie and Karin on the following dates: