SYDNEY SINGER/SONGWRITER AND all-rounded artist Ali Carter is someone who’s passionate about continuously learning about her craft! Since she was five, Ali did dancing classes and she enrolled in private singing lessons. But her hunger to learn about music didn’t end there; Ali has kept with studies since high school.

Ali’s heavenily voice was noticed by Triple J when she wrote four songs that appeared on a CD which was included in the Bondi Wave music programme in the year 2000. Ali’s songs were a hit on Triple J. She can turn Soundgarden’s Black Hole Sun into something totally unrecognisable! (see further down)

In 2003 Ali forming her band Alicats played regular gigs before bravely deciding to try her luck in London. There for two years Ali played in jazz clubs with talented instrumentalists. After the tragedy of the London bombings Ali was asked to perform at a commemorative event.

After returning to Australia in 2007, Ali teamed up with a pianist doing residency gigs in Western Australia. When Ali went back to her hometown Sydney, she embarked on further studies receiving distinctions in seven out of twelve subjects proving her never-ending passion of the ins and outs of music.

During a trip to The Big Apple, Ali began playing a traditional African instrument called a Mbira (otherwise known as the “thumb piano”. After another trip to New York, Ali begun intensive jazz studies, ensuring she could be her best in jazz. In 2013 Ali recorded one of her favourite Aretha Franklin songs with the help of several producers who have helped the likes of Whitney Houston, Paula Abdul and Hall and Oates.

So thankyou Ali for taking the time to be interviewed, especially when you’re such a busy woman! Also a special mention to Tessa!

G’day Ali and thanks for wanting to have a chat with myself so people can find out about your successes as an artist! Reading your bio, it seems like music and the performing arts were always in your DNA. How important was it to study music (especially jazz) and vocal technique?

It’s a pleasure! I started private lessons when I was twelve, and my mother was a music teacher, so her influence was great. At the time I was quite into musical theatre so it was really important for me to learn how to look after my voice and understand how it all worked, and to just develop and build on my natural singing voice. I loved the sound of jazz, and the voices; Ella Fitzgerald would be probably the first jazz singer I came to love, and probably still my favourite, and my ear naturally leaned toward the sound of jazz, so studying it and learning how it works was important. I am not the most amazing student though. My understanding of music is inherent, I use my ears and feeling first and foremost. Knowing some theory of music just helps put it all together and communicate ideas more effectively.

You even returned to study in in 2009 completing twelve subjects in music subjects! Are you one of those people who’s fascinated by the ins and outs of music?

Yes I like getting the tools to best manifest the ideas I have constantly going around in my head!

As a young girl what did you enjoy singing? Who were your main influences?

Singing has always been a natural thing for me, and I was really lucky too, that my mum had a great record collection. My influences are quite varied. I love roots music and I felt a connection to jazz as a child. For example I remember when I was about thirteen, hearing one of mums records; it was Frank Sinatra singing Girl From Ipanema, (before it got played to death and became elevator music!) with this amazing full, lush orchestra…it was so subtle and beautiful, I was blown away..I also loved a lot of pop music, (and still do) and I remember when I discovered Bjork. When Debut came out, it changed my world. She is still one of my top favourite artists and definitely a big influence for me. I cry listening to Joni Mitchell. I love the folk sensibility. There is such a vulnerability and honesty in the story telling.

Your sunny original Be Love came 13th in the 2002 MusicOz’s song competition in the jazz section. What was it like to receive recognition for your talents as a singer/songwriter?

It’s cool. I also felt quite chuffed being shortlisted in the Vanda and Young Song Competition, as I had friends who entered, who I consider great artists, who didn’t get a place, so I always feel so honoured and encouraged to keep writing songs.

When I watched your cover of Soundgarden’s Black Hole Sun I said “wow” (in a good way). Your voice is so smooth and heavenly! Do you see many peoples’ faces drop when you turn a mega rock single into something utterly different?

Yeah it’s great! I love creating that kind of element of surprise with music. You hear those ‘ ah ‘ sounds come from the audience, which is so cool, it’s like a collective ‘yes, we know and love it!’ Then I sing it from my heart and make it my own. I would never want to directly emulate a song, but do it in a way that is my own sound and style.

In 2005 what made you decide to go to London? Can you describe how different playing venues is over there?

I wanted to have an experience living and working abroad. Honestly, venues are not unlike those in Oz, and playing music with people in different countries does not vary much. We all love music and team up to play and give it together! Music is THE universal language we all understand. It is about the heart. Audiences are just as warm and open I found in London, as they are in Oz. 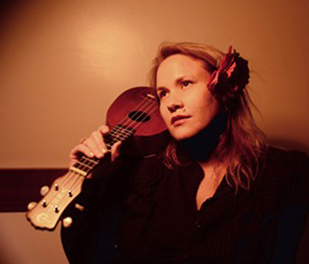 You’ve learnt to play out-of-the-ordinary instruments in recent years. Do you find this helpful to include in other areas of your artistry?

Definitely. It really is a journey of discovering new things all the time. Being open to life. I had a mystical attraction to the Mbira, and the way I came to start playing it was very ‘meant to be’ it’s such a healing instrument, and I love the sound so much. The ukulele also just feels right. My grandfather was a comedian in the vaudeville theatre days and used to play a bit of uke, and apparently I would sing along with him as a child. I started playing this humble instrument a few years ago and so many songs poured out of me. I have a real love and appreciation for it. Also, it rates highly for its portability!

How has your recording gone in New York with music producer V Jeffery Smith, and producer of many successful recordings including Whitney Houston, Paula Abdul and Hall and Oates?

It was cool, a great experience. I was there looking for producers to work with and I was fortunate to meet Jeff through a mutual friend. He is a true pro and a great guy. We recorded a favourite Aretha Franklin song, which turned out really beautiful but it is not yet released. Watch this space!