Melbourne was spoilt with Maroon 5’s last gig of their Overexposed World Tour, even though Adam admitted he was feeling “under the weather” last night. Although you would have never noticed it… The band played a solid two hour set. 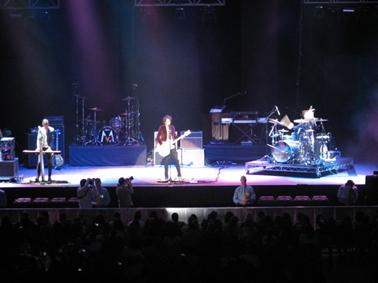 A local band played first (I’m sorry I didn’t catch their name) then Evermore stole the stage with songs from their new album Follow The Sun which was released yesterday so last night was an extra special night for them including the lead singer Jon Hume wearing a maroon jacket. Jon said Good evening Melbourne! H ow are you doing out there?” and later into their set he took a photo of the crowd. As well as showcasing some of their new songs from Follow The Sun including a really sweet song called Hey My Love, they did hits like Light Surrounding You where the crowd raised different coloured lights and Ride On (It’s Too Late). It’s refreshing to see a band who are very appreciative towards the crowd as Jon left saying, “Thanks so much for having us guys.

Now when the arena lights darkened for Maroon 5 the crowd went wild! Adam, James, Mickey, Matt and PJ came on all dressed in white. Some people weren’t fans of their outfits but for me Adam could wear anything and he’d still look hot! (Sorry I had to say it!) 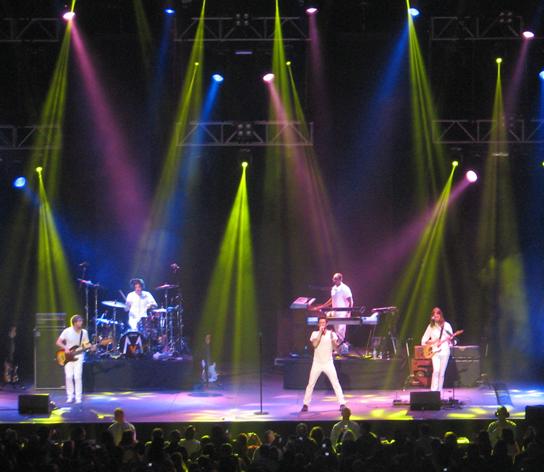 Adam has seemed to caught on about how us Aussies don’t get offended easily when someone says we’re doing a piss-poor job at something. At the start of One More Night, Adam wanted the crowd to repeat some notes, but the singing wasn’t up to his standard so he comes out saying this classic line, “Not be too cool for school!” It worked. 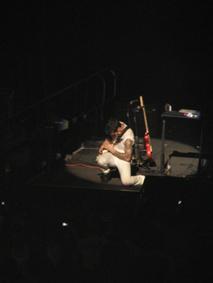 Maroon 5 pleased the crowd with their hits such as Payphone, Sunday
Morning, Harder To Breathe, Misery,If I Never See Your Face Again, This Love, She’ll Be Loved (acoustically and with a burp thrown in from Adam who didn’t deny it and went on to explain how singers normally would cover it up) and their massive hit Moves Like Jagger (and Adam has the moves like Jagger!) They also did their upcoming single Daylight which holds a special place in Adam’s heart and for most of the song he sang on his knees.

Adam and Jesse are surprise packets! The band played an awesome version of The White Stripes’ Seven Nation Army, but Adam on drums and Jesse on lead vocals. Other times Adam impressed everyone with guitar solos and rapping in Hearts Stereo which Gym Class Heros released last year.In fact Adam makes playing guitar sexy! They even played a brand new song Wipe Your Eyes

It was quite obvious Maroon 5 were enjoying the night as Adam said it was a “great fucking night…” and “Australia’s the coolest island!

My favourite quote of the night from Adam would have to be, “We love ladies because we give them things to write about!

If I Never See Your Face Again

Won’t Go Home Without You

The Man Who Never Lied

She Will Be Loved